Former India opener turned veteran commentator Aakash Chopra has said that almost all the Rajasthan Royals (RR) batters, apart from Shimron Hetmyer, struggled in the middle against the Lucknow Super Giants (LSG). RR scored 67/4 in the first 10 overs of their innings. However, Hetmyer’s swashbuckling knock took them to a fighting total of 165/6 and they eventually won the match by three runs as well.

While reviewing the game in a video shared on his YouTube channel, Aakash Chopra said: “It was a struggle right from the start if you see RR’s situation, whether it was Buttler or Samson. Devdutt Padikkal played for a little while for sure but then he also got out. Rassie van der Dussen also gets out. Krishnappa Gowtham picked up two important wickets. Dushmantha was bowling really well. Avesh hits the stump as soon as he comes to bowl. And there Shimron Hetmyer – a lot to admire. He batted very well. He got a life, Krunal dropped a catch, if he had held that, the story might have been different.”

He said: “They sent Ashwin to bat up the order. Ashwin also hit two sixes against Krishnappa Gowtham but after that, something happened which is historic, that he retired out. I feel he was called from outside, he said he is going and Riyan Parag will come and bat. It might not have made too much of a difference in the end to the total score but it was an important moment because you destigmatized the taboo, that you do not retire out anyone. It is absolutely correct in my opinion.”

Ashwin scored 28 runs off 23 balls to help build the Rajasthan Royals innings along with Hetmyer. Riyan Parag, who replaced him in the middle, scored eight runs off four balls, which included a six off Jason Holder as well. 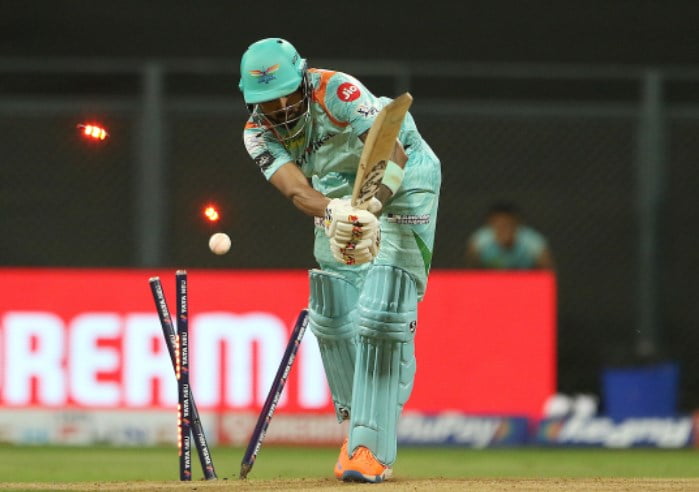 However, KL Rahul backed the team and said that he had full faith in his side to return with a bang as well.

He said during the post-match presentation: “Look, I think we have a team that is never out of the contest. We bat really deep and have options with the ball. Even when we are 20/3, we always believed that we could win this game. Obviously today, we needed one good partnership in the middle overs but it never got going. Brilliant from Stoinis in the end to keep us in the game. Games like this will just give us confidence and remind us that we are a good team.”

He also opined on the thinking behind the revamped batting order. He added, “We know how dangerous Stoinis is at the end and we wanted him after the 15th over. We will try to be a little unpredictable at times and shuffle the batting order. These targets can be tricky and we thought Gowtham can put the bowlers under the pump. We will be a team that will be unpredictable and make some moves that will be aggressive.”

However, it was Trent Boult who picked up two wickets in the very first over. Crediting Boult for the delivery that got him out, KL Rahul stated: “I didn’t see it, that’s all I can say. It was a good ball. Just gotta give it to him. We’ve done really well in the four games. Our death bowling is the one thing that has stood out. Today, we could not execute the yorkers and our plans. Guys like Shimron can do the damage in the end if you miss your yorkers. But we will go back and work harder to execute our plans.”

KL Rahul’s LSG will next play against Mumbai Indians (MI) on April 16 (Saturday) at the Brabourne Stadium in Mumbai.