Anushka Sharma and Virat Kohli have returned from their vacation as the duo were spotted on Monday afternoon at Mumbai’s private airport. While Anushka was seen in an all-black outfit, which she paired with a boater hat, former India captain Virat Kohli kept his look breezy with an all-white dress as well. Meanwhile, as soon as they stepped out of the airport, shutterbugs didn’t leave them alone. And, they didn’t even leave their daughter Vamika as well.

Meanwhile, after their return, A top news company has taken their pictures and posted Vamika’s picture along with them on their social media by tagging them. While the celebrity couple has asked the media not to do so before too, this incident didn’t go down well with Anushka and she decided to comment there directly. 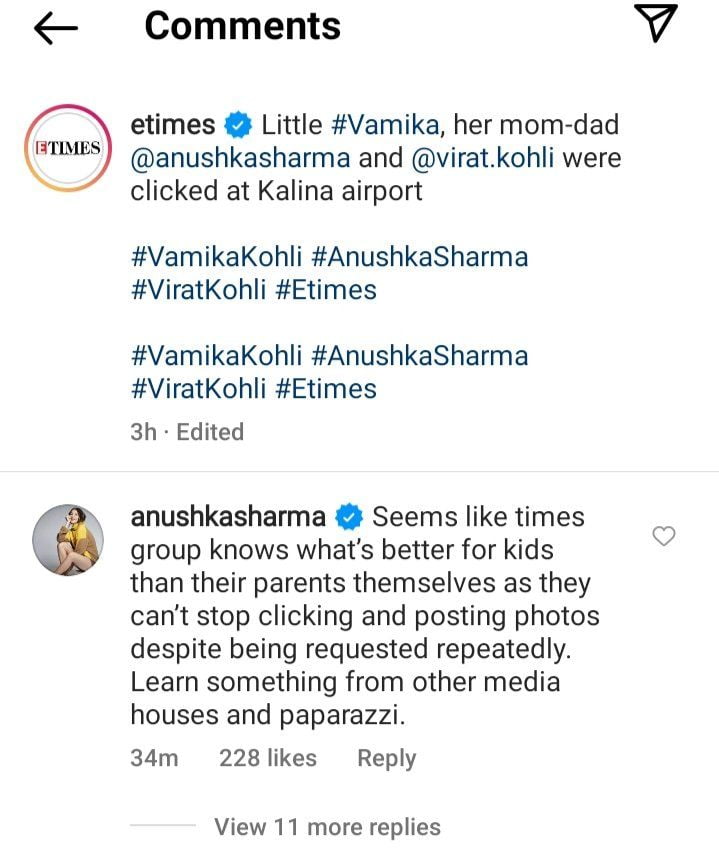 Notably, they were on a beach vacation, although they did not disclose their destination, fans guessed it to be the Maldives. On Sunday, Anushka Sharma also shared photos on Instagram where she was seen posing for the camera by setting the timer mode. She also showed everyone how to take pictures by herself looked like. “The result of taking your own photos,” she captioned the post as well.

However, earlier, Anushka Sharma also shared a picture, featuring a baby carrier and it had Vamika‘s name written on it as well. Sharing the photo on her Instagram stories, Anushka also wrote “Will carry you through this world and the next and beyond, my life.”