The next edition of the Indian Premier League is around the corner. Before that, a mega auction will take place and all the existing franchises can retain only 4 players.  However, the deadline to retain 4 players before the IPL 2022 is near too and the franchises have to submit the final list to the BCCI by November 30 as well.

However, several reports have suggested that a few IPL franchises have already made the decision already and Royal Challengers Bangalore (RCB) is no different. While former captain Virat Kohli seemed to be retained, there are still doubts over other players as well. But, former RCB coach Daniel Vettori has named 4 players he wants RCB to retain.

While speaking to ESPNcricinfo, Vettori named Kohli, Yuzvendra Chahal, Harshal Patel, and Glenn Maxwell to be retained as well. As per the veteran, who also led RCB to the final of IPL 2011, AB de Villiers’ sudden announcement of retirement has saved RCB from being in a dilemma of whom to retain. Notably, AB de Villers was a part of RCB from 2011 to 2021.

“RCB have avoided a dilemma with AB de Villiers retiring. Otherwise, it would have been difficult for them to figure who they had to retain – it would have been a tough balancing act. But Chahal’s performance last year means he has to stay with the franchise,” he told ESPNcricinfo.

However, Virat Kohli’s retention isn’t a surprise as he has been a vital cog for Team India for long. He is also the highest run-scorer in the history of the league while Maxwell is considered as one of the best big-hitters of the game. He smashed 513 runs, striking at 144.10 in IPL 2021.

On the other hand, Chahal, who has been leading RCB’s spin attack since 2014, returned with a bang in the 2nd half of IPL 2021 and looks set to be with the team as well. As for Harshal, he bagged the Purple Cap in IPL 2021 with a record of 32 scalps. He even earned his maiden India call-up on the back of his IPL performance as well. 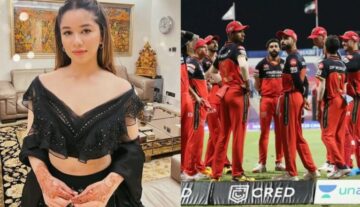 Social Shots
By CricShots - Feb 7, 2023
Sara Tendulkar Shares Her Love For RCB In A Unique Way