David Warner bounced back to a great form with a first-ever T20I century against Sri Lanka and Australia thrashed Sri Lanka by 134 runs in their opening match in Adelaide on Sunday. Warner scored an unbeaten 100 and Australia posted a huge total of 233 for two, where skipper Aaron Finch and Glenn Maxwell both scored the fifties. Sri Lanka, however, bowled out at 99 for nine from their 20 overs. With their stunning knocks, Sri Lankan bowler Kasun Rajitha gave away 75 runs in his four overs and became the most expensive bowlers in a T20 international.

“It’s great to come out and play on nice true wickets,” David Warner said. “The tone was set by Finchy. I tried to go on and be there at the end. I’d like to think we have enough runs.”

“Lovely start to the summer. The boys were fantastic, Warner and Finchy were superb,” Mitchell Starc said. “The bowling too was clinical, a bit of work to do in the fielding, but a great performance all in all.”

Australia captain Aaron Finch also praised for his side as well as the opener.

“The way played Davey (Warner) played was outstanding. Maxwell, the way he went from ball one, was brilliant. To get the job done so well is really pleasing,” Finch said at the post-match presentation. “It was about doing our things really well. We always want to start well and we were pretty clinical today. Maybe a little bit (room for improvement) of execution with the ball. All in all, it was an outstanding job – our quicks upfront and the spinners later.”

“It means a lot to contribute to the team and put us in great position. It was a good milestone, but got a great total on the board and it’s always tough to chase a big one in Australia. Sometimes it’d be tough with no rotation of strike but one of us had to go hard against the new ball. You always get good support here in Australia. We thrive on people coming and watching us,” said David Warner.

Despite the loss, Sri Lanka captain Lasith Malinga said that his team will learn from the mistakes and do well in the next game.

“The bowlers didn’t bowl in the right line and length. This is a good learning phase for our young bowlers. We know we are playing against a tough team, but this is an opportunity for the inexperienced players to get used to the conditions before the World Cup. We want to compete well in the next matches. The batsmen are playing on drop-in pitches for the first time and didn’t know how the pitch will behave. This is not an excuse. We have to adjust in the next few games,” said Malinga. 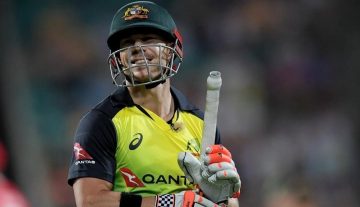