Australia opener David Warner is considered as one of the swashbuckling openers in the world right now. However, he wants to play in the 13th edition of the IPL if it takes place this season, his manager confirmed on Thursday. Meanwhile, the COVID-19 pandemic continued to damage havoc on the world.

Coronavirus has affected not only everyone’s lives but also sporting events across the globe which included the upcoming edition of the Indian Premier League where no decision took place by the eight IPL franchise owners as the situation has not changed much in the last few days amid the novel coronavirus pandemic in the country as well as globally.

Earlier the BCCI has postponed the start date of the tournament from March 29 to April 15 as India currently reported over 200 positive cases and four deaths for COVID-19 so far. While all the foreign visas have already been put on hold till April 15, the BCCI president Sourav Ganguly has said that a “truncated IPL” can take place where a minimum 17 days already lost.

The coronavirus pandemic has so far claimed over 9000 lives and infected more than 2,00,000 across the globe. The Australian government has also imposed a level-four travel ban. However, James Erskine, the manager of David Warner said that the Sunrisers Hyderabad captain could play if the IPL will take place.

“If the IPL is on David Warner’s planning on going,” Erskine was quoted as saying by ‘The Age’. “If things change dramatically, which can happen in the space of an hour, the answer is you change your mind. It’s no different to everybody else.”

Seventeen Australian players are likely to feature in the T20 event this year and Cricket Australia is still checking whether to give permission to its players to be a part of the league. However, alongside David Warner, Steve Smith, Pat Cummins and Glenn Maxwell need to take a call if they want to take part in the cash-rich tournament if it takes place. While Warner has a contract of USD 2.5 million with Sunrisers Hyderabad, Smith was retained by Rajasthan Royals for USD 2.5 million.

On the other hand, Pat Cummins became the highest paid overseas player in the history of the Indian Premier League with a contract of whopping USD 3.2 million with Kolkata Knight Riders. Maxwell received a USD 2.2 million contract with Kings XI Punjab too. 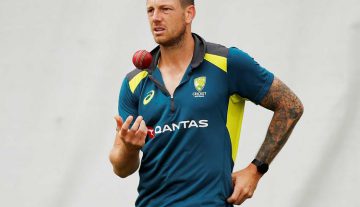 Article
By Shruti - Nov 17, 2019
James Pattinson Banned From the First Test Against Pakistan