Former Australian cricketer Dean Jones seems to be unconvinced by aging Indian veteran MS Dhoni’s finishing skills – despite him claiming the Man-of-the-Series award in the recently concluded ODI series against Australia, which India won 2-1. In his column for The Times of India, Jones termed Dhoni as the main ‘problem’ for India with regards to how the Indian team will fit in young wicketkeeper-batsman Rishabh Pant.

Jones elaborated, “The main ‘problem’ is Dhoni. He’s back in this team and the question is will India if push comes to shove, play Rishabh Pant as just a batsman? India couldn’t be having a better journey for their World Cup campaign than what they are having now and they have got to make sure they finish off New Zealand as well. What would be the worst thing to ruin this would be to go out against the Black Caps and drop their guard.”

However, Jones also showered praises for India’s successful tour of Down Under.

Former cricketer said, “This was the greatest tour that India has ever had to Australia. The only blemish was probably the way they played in the Test match in Perth, but overall the great thing was that a lot of the boys played good overseas. Everyone did something on the tour to contribute.”

Yuzvendra Chahal, who claimed a career-best 6/42 in the final ODI against Australia in Melbourne also earned thunderous applause from Jones.

Dean Jones said, “The emergence of Chahal on his first outing Down Under was awesome, while Kuldeep Yadav continues to impress and had a wonderful ODI series. He showed everyone why he’s so good. Shami worked long and hard in the Tests and then backed that up with another superb ODI series. Sharma was brilliant in the one-dayers too, while Virat Kohli lead magnificently right through.”

Jones went on to compare the current Indian squad to the all-conquering West Indies of the 1980s and early 1990s.

He further added, “India now is no different to what the West Indies were in the eighties and early nineties. They have got to maintain the reputation that they can win in anyone’s backyard now and must not take the foot off the pedal. The Windies were brilliant at it and had that “scare factor”, which is what India have now. That’s huge going into the World Cup.” 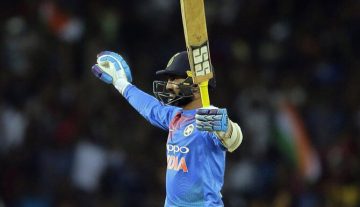 Article
By CricShots - Mar 19, 2018
Dinesh Karthik Reveals The Secret Of His Finishing Abilities