The veteran Indian wicket-keeper batsman, Dinesh Karthik reckons that he will back in the Indian squad that he can be back in India fold for the ICC T20 World Cup 2020 to be held in Australia next year as the team’s designated finisher.

Speaking to The Times of India, the gloveman, who will be leading Tamil Nadu in the Syed Mushtaq Ali Trophy 2019-20, starting tomorrow, he said, ”We have a T20 World Cup coming up and I am definitely keen on contributing for the team in the finisher’s role. I feel confident playing that role and can also contribute when it comes to setting a good total batting in the middle-order.”

ALSO READ: Tickets For Maiden Day-Night Test Of India Got Sold Out In Two Days Online

Karthik has been in some phenomenal form with the bat, scoring 418 runs in the recently concluded Vijay Hazare Trophy 2019-20 at an average of 59.71. TN made it to the final, losing to Karnataka. With the young Indian keeper Rishabh Pant failing to perform as per the expectations and the likes of Sanju Samson also in the mix, the pressure is certainly on the young wicket-keeper batsman from Delhi.

Add Karthik to the mix and his experience could prove to be an advantage if Pant continues to fail with the opportunities.

Even behind the stumps, Pant’s glovework hasn’t been as apt as it should be and while he gets targeted a plethora of times on the social media – be it for a cheeky birthday wish to his skipper Virat Kohli or botched DRS appeal in the 2st T20I against Bangladesh – there are serious concerns over the youngsters handling of pressure situations.

Talking about the Syed Mushtaq Ali, Karthik conceded that Tamil Nadu has not played up to their potential in the format despite having big names in the squad. 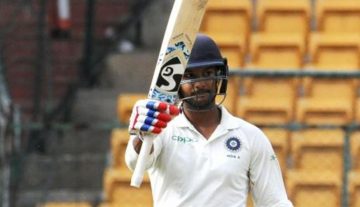