Former India cricketer turned veteran commentator Aakash Chopra feels that Rishabh Pant’s ego cost him his wicket during Monday’s (May 16) IPL 2022 match between the Delhi Capitals (DC) and the Punjab Kings (PBKS). Pant, who scored just seven runs, smashed Liam Livingstone for a six but he was stumped off the very next ball while going for another big hit. However, the Delhi Capitals still reached a decent score of 159/7 and went on to win the match by 17 runs as well. 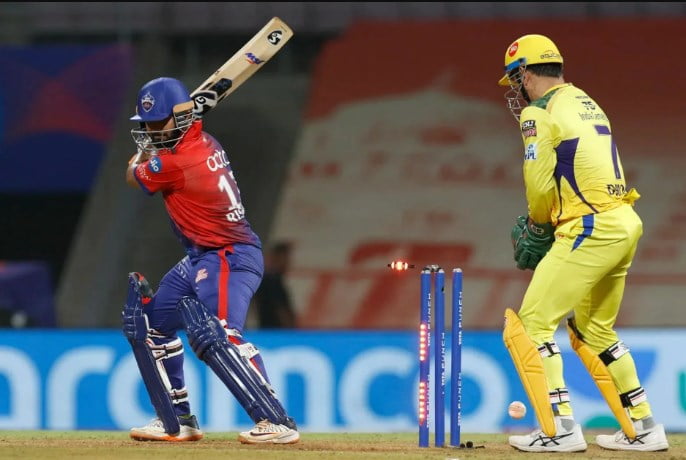 While reflecting on the Delhi Capitals’ batting effort in a video shared on his YouTube channel, Chopra explained: “There are some decisions which I don’t understand. Lalit Yadav was sent up the order, why? Rishabh Pant, you come to bat. He (Yadav) played 21 balls for 24 runs. You (Pant) have to bat, you hit a six and are left dumbfounded on the next ball. Ego actually came in the way because a lot of overs were left. You wanted to hit Liam Livingstone out of the stadium.”

He added: “David Warner was dismissed off the first ball. When you get such a start, it seemed they (PBKS) had struck a lottery. You get Livingstone to bowl and he gets out there, this is a phenomenal start to the game.”

He elaborated: “But after that Sarfaraz, yeh Sarfaraz dhoka nahin dega. He batted very well, different types of shots, fours and sixes. Mitchell Marsh was anyway batting well but wickets started to fall after that, which was bound to happen because there was turn on the pitch. Rovman Powell, he disappointed a little. It is good that Axar kept on fighting. He made 17 runs, very important runs. If these 17 were not scored, you wouldn’t have reached 159.”

Meanwhile, Chopra picked Shardul Thakur’s spell as a game-defining effort. While acknowledging that Shardul Thakur was a bit expensive, Aakash Chopra said that the wickets he picked up were more crucial than conceding runs.

He reasoned:  “It has to be Lord Thakur. Cometh the hour, cometh the Thakur. The first over was critical, it was the sixth over – Shikhar Dhawan, Bhanuka Rajapaksa, he dismissed both of them in one over. If we see from Sholay’s era, Thakur and Gabbar don’t get along. Gabbar loses this fight and Gabbar lost to Thakur this time as well. It was a pitch on which you were going towards your spinners for wickets and in such a case if your fast bowler gives you two wickets – clap your hands. Nortje had given one wicket earlier, Axar and Kuldeep were to come, it was known that they will pick up wickets but Shardul picking up wickets I think was incredible. Actually his bowling was there in two phases. It was not that he was not expensive, he gave 36 runs in his four overs but picked up four wickets, his best ever IPL figures.”

“In the end, when it seemed that Jitesh Sharma will do the genie job, nothing happened. He (Thakur) dismissed him as well, a good catch from David Warner. Then Kagiso Rabada hit a six and he dismissed him as well. He kept the match in his grasp with the four wickets and helped Delhi win,” he again shared.

However, Aakash Chopra has also questioned the Punjab Kings’ (PBKS) captain Mayank Agarwal’s decision to not use Kagiso Rabada’s full quota of four overs against the Delhi Capitals (DC). Rabada returned figures of 1/24 in his three overs. The DC bowlers then restricted the Kings to 142/9, thereby winning the match by 17 runs as well.

Aakash Chopra said: “Kagiso Rabada was expensive at the start but later he didn’t bowl his fourth over. What captaincy you do, I don’t understand. The pitch was turning a little, agree Liam Livingstone bowled his overs but not good enough. Liam Livingstone picked up three wickets, Rahul Chahar gave 19 runs in his four overs but there was no wicket in his account. Arshdeep picked up three wickets, Arshdeep was brilliant. He dismissed Sarfaraz [Khan] at the start and later he came back to dismiss Lalit Yadav and [Shardul] Thakur.”

He explained: “Jonny Bairstow was hitting a lot against pace, he was batting very well. Shikhar Dhawan was there along with him. Bairstow just found a fielder off Nortje’s short ball. Then Shikhar Dhawan and Bhanuka Rajapaksa in the one over from Shardul. After that, when spin came, it was all downhill, whether it was Liam Livingstone or Mayank Agarwal.”

“There is very little might seen in Punjab’s batting because Mayank does not have the form, Bhanuka Rajapaksa’s stars have gone down suddenly, Shikhar Dhawan is having a decent year – not a great year, Jonny Bairstow takes a class in the first innings but hasn’t played a big knock in the second innings. Liam Livingstone is slightly susceptible on a turning surface. It was Jitesh Sharma who kept this match alive, kept fighting till the end. He has been the find, two players have shone in this team – Jitesh and Arshdeep,” Aakash Chopra concluded.