Sunrisers Hyderabad had a rather forgettable season last year in the Indian Premier League (IPL). While they sacked David Warner from the captaincy, they finished at the bottom of the points table as well. With the IPL 2022 season taking place at its original time, two new teams have been added and the Board of Control for Cricket in India (BCCI) has said all the old IPL franchises can retain four players. Since Warner was dropped from the SRH, fans want SRH to retain him for the next season.

However, David Warner seemed doesn’t like to continue his stint with the Sunrisers Hyderabad team anymore as well. It will be interesting to see which franchise will buy him and what would SRH do in the mega auction. Meanwhile, the BCCI has asked all the franchises to submit the list of retained cricketers for the next season. The deadline is on November 30 and the SRH official Instagram handle asked about the fans’ views as well.

It was then a fan asked Sunrisers Hyderabad to retain David Warner. To which, David Warner wrote: “no thanks.” Warner’s remark went viral all over the internet. And, his response confirms that Warner will play for another team in the next season. 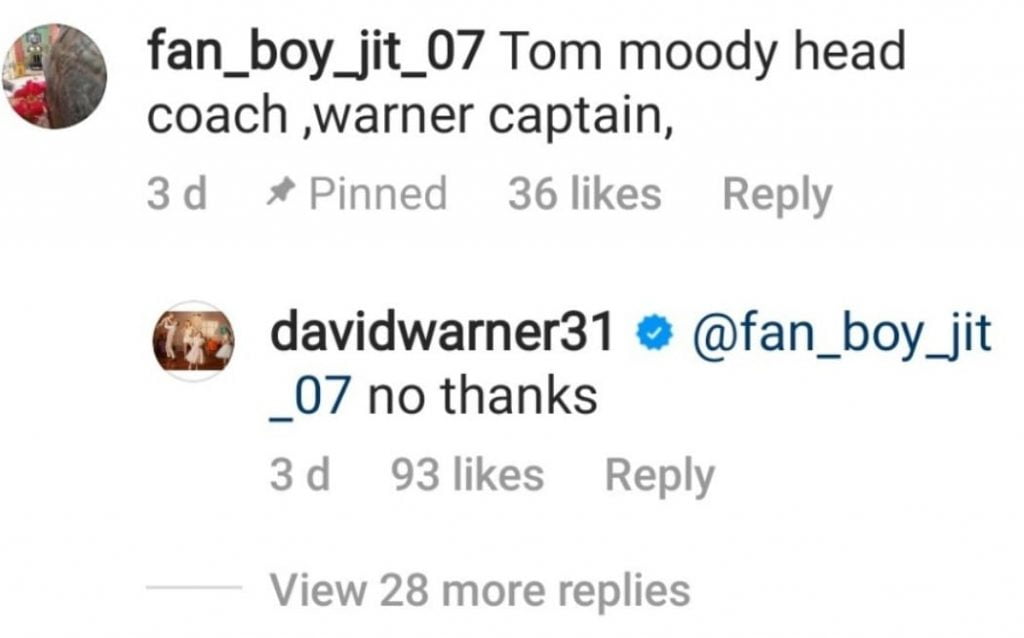 As far as Australia’s international series is concerned, they are preparing for the much-awaited Ashes series. Pat Cummins has been appointed as the new captain after Tim Paine resigned.

“It might look a little bit different from the outside potentially to other captains in the past. There’s going to be times where I’m out in the middle, it’s a hot day, I’m in the middle of a (bowling) spell and I need to turn to people for advice for tactics, for experience, and that’s one of the big reasons I wanted Steve to be vice-captain,” Cummins said in his first media interaction after being appointed captain of the Test side. “There will be times on the field when I throw to Steve, and you’ll see Steve moving fielders around, maybe doing bowling changes and taking a bit more of an elevated vice-captaincy and that’s what I really want. That’s what I’ve asked for, and I’m really glad Steve is happy with that as well.”