Veteran cricket commentator Harsha Bhogle recently commented on social media regarding the prevailing tensions in India over the National Register of Citizens and Citizenship Amendment Act. However, he has now picked his best one-day international team of the year. Speaking on CricBuzz’s official YouTube channel, he said the fact that the performance in the ODIs in 2019 received a boost because of the ICC World Cup in July.

He picked India opener Rohit Sharma and England’s Jason Roy as his XI’s openers. While Rohit hit seven centuries in the ODI this year, Roy had played with a strike rate of almost 120. The No.3 pick was an easy thing as this is India captain Virat Kohli who scored almost 1,300 runs in 24 innings in the year at an average of 58.72.

At No. 4, Pakistan T20I captain Babar Azam who, as per Harsha Bhogle, had a “break out year” in 2019. Babar averaged above 60 with three tons this year. For No. 5 and No. 6 slots, Bhoglechose Bangladesh all-rounder Shakib Al Hasan and England all-rounder Ben Stokes. For the wicket-keeping position, Bhogle picked England’s keeper-batsman Jos Buttler who had a whopping strike rate of 135-plus this year. He preferred Buttler ahead of others.

In the bowling department, Bhogle chose left-arm pacer Mitchell Starc besides England pacer Jofra Archer and India’s Jasprit Bumrah. This year has really been a great one for all the pacers. As the only spinner, Bhogle picked India’s, Kuldeep Yadav. 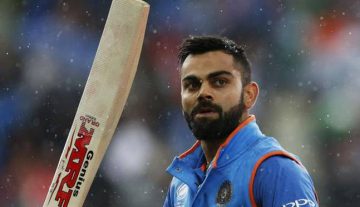