After India levelled the series against West Indies at Vizag with a whopping 107 run victory, West Indies captain Kieron Pollard said that his side conceded too many runs in the first innings, and said that 40 or 50 fewer runs could have made the difference in the game.

“The match showed that in order to win they (India) have to score big against us,” Pollard said in the post-match presentation ceremony. “It was a matter of execution for us. We were not able to execute our plans how we want to. 40-50 runs less, it might have been little different (in the match).”

“I thought we gave away too many runs at the back end, in the last 20 overs. We were a bit indisciplined towards the end of the 50 overs. We thought and saw that it will be a good wicket. They were able to get away from us at the back end,” he added.

Kieron Pollard praised the efforts of his IPL teammate Rohit Sharma for his brilliant batting.

“Rohit batted well and so did KL Rahul. That allowed the other batsmen to play freely (in the death overs) with the platform laid,” Pollard said.

With the series level, Pollard also praised the contributions made by the promising youngsters, especially Nicholas Pooran who kept West Indies in the chase for long long time.

“There are some youngsters and there are some talented ones, I have spoken about them again and again. Pooran, we got a glimpse of him tonight. Nothing happens overnight, it’s about putting the pieces of puzzle together, it’s work in progress. We deserve to go out with a bang, our heads and shoulders are still high. We’ll come back and fight hard in a couple of days,” Kieron Pollard concluded. 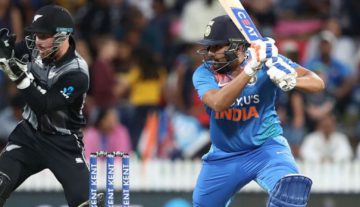