Former Australian skipper, Ian Chappell has accused Steve Smith of undermining the current Australia skipper Tim Paine on the field. Steve Smith was seen making field changes in the recently-concluded second Test between Australia and Pakistan. During a podcast for Macquarie Sports Radio, Chappell expressed his disliking for Steve Smith’s actions on the field.

Former Australian skipper said, “I tell you what I don’t like to see, Steve Smith is moving a few fieldsmen around. He did have a chat with Tim Paine, trying to talk Paine into moving a fielder on the off-side, but I’m not sure Paine moved him as far as Steve Smith wanted. Smith started moving him, and I hate to see that. England used to do it a bit, blokes other than the captain, and I always felt it was white-anting the captain.”

Steve Smith, who was Australia’s leading run-scorer in the Ashes, could only manage 40 runs in two innings against Pakistan. In the second Test, Australia defeated Pakistan an innings defeat to sweep the series 2-0 on Monday.

Australia won the toss and opted to bat in Adelaide. David Warner then came out all guns blazing and notched up his first triple century in the longest format of the game. He scored 489 runs in the series.

The hosts declared their first innings at 589 for three with David Warner unbeaten at 335.

With the ball, Mitchell Starc was the wrecker-in-chief in the first innings, picking up six wickets for 66. On Day four, Nathan Lyon completed his 16th five-wicket haul in Tests to help Australia clinch the series. 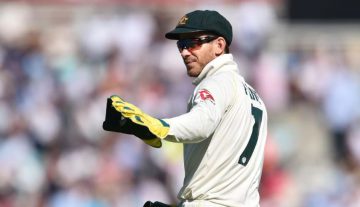