India and South Africa will be locking horns in the second Test of the three-match series at the Maharashtra Cricket Association Stadium in Pune on Thursday. The Indian opener, Rohit Sharma and the spinners were on fire in Vizag during the first Test as the Indians romped to a superb fifth-day win against the Proteas.

Despite batting superbly in the first innings, South Africa wasn’t able to bat out on the fifth-day pitch. With a series win in the balance for Team India, they will fancy their chances although their memories at the venue aren’t very memorable. The last time they played here, Australia and Steve O’Keefe got the better of the Indian batsmen and the hosts lost the game by a huge margin. This should give the Proteas some hope as well in what promises to be a mouth-watering clash.

The pitch in Pune always expected to support the spinners, although it should be best on Days 1 and 2 to bat here, just like in Vizag. The weather forecast doesn’t seem to be great for the duration of the Test with persistent rains threatening to render this game void. Batting first upon winning the toss would be the ideal choice for either side on Thursday. Here are some predictions of the game:

In the Indian team, no changes are expected as they started the series on quite a dominating note. While the opening combination was one worry they had prior to the start, Rohit Sharma and Mayank Agarwal scored more than 400 runs between them at Vizag which titled the game completely in India’s favor. With the likes of Kohli and Pujara in their ranks as well, India looks formidable on paper with the bat in hand. Their spin twins, Ashwin and Jadeja will be expected to play a crucial for the Indians with Shami also complementing them with this ability to swing the old ball.

As for the South Africans, a couple of changes can be expected as someone like Zubayr Hamza could be drafted in for Theunis de Bruyn, while Vernon Philander’s accuracy could be swapped for the pace of Lungi Ngidi. The rest of the team should remain the same with the likes of Elgar and de Kock doing well in the first innings in Vizag.

All three of their spinners failed to trouble the Indian batsmen, especially Rohit who took advantage of their inefficiency. Keshav Maharaj will be the key on such a surface with the left-arm bowler already being considered as one of South Africa’s best in history itself. Kagiso Rabada wasn’t able to do much himself and would love to contribute with a wicket or two at Pune. 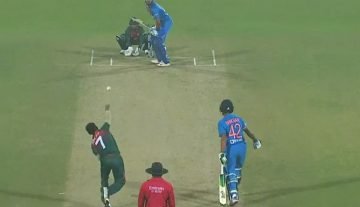