With the series currently been drawn at 1-1, India and West Indies will be locking horns with each other in the third and the final ODI in Cuttack. Although they weren’t given much of a chance ahead of this tour, West Indies has surprised the men in blue with their fearless approach in both the T20s and ODIs. They have been aided by some poor Indian fielding as well although credit must be given to the tourists.

After conceding the first game, India put on a batting masterclass which saw the whole batting order click together. With momentum on their side, India is considered as the favorites for the series-decider as they look to seal an ODI series win at the expense of the Windies. With the Barabati Stadium playing host to this game, another cracking encounter beckons.

The last ODI played here between England and India in 2017 saw nearly 750 runs being made. A similar type of wicket could be on offer with some swing available in the early overs. The spinners will also come into play as the game progresses. Chasing would be the ideal scenario for both sides with the ball coming on nicely under the lights. Here are some of the predictions for the game:

India lost Bhuvneshwar Kumar to injury, followed by Deepak Chahar after the second ODI. Their replacements are Shardul Thakur and Navdeep Saini. India’s choice of playing XI will depend on whether they want to go with three seamers or three spinners. If they pick only two-seamers, Saini will have to beat Thakur to make it to the XI. He was impressive for Delhi in the recent second round of the Ranji Trophy, while Thakur failed to impress in the second ODI.

West Indies need a lift in their bowling, but they might want to continue with the same playing XI. One of the swaps possible is bringing back the leg-spinner Hayden Walsh Jr for left-arm spinner Khary Pierre, but the leggie didn’t seem to have his captain’s confidence in the first ODI, when he bowled only five overs. And considering India plundered 387 in the second ODI, Pierre’s economy rate of 6.88 across nine overs was commendable. 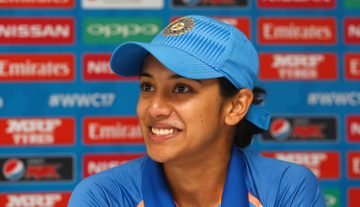 Article
By CricShots - Aug 14, 2018
Smriti Mandhana Reveals Her Idol While Growing Up