The coronavirus outbreak has been increasing day by day which is taking a toll on the cricket tournaments. There are no doubts over the much-anticipated T20I series between World XI and Asia XI in Bangladesh as well because of the same reason. Bangladesh Cricket Board (BCB) is hosting the games to mark the 100th birth anniversary of Sheikh Mujibur Rahman, the founder.

But due to the massive outbreak, the Bangladesh government had to change some programmes which has put a question mark on the T20I series as well that will feature some renowned names across the world. The two matches are scheduled to take place in Dhaka on March 21 and 22.

“Players from western countries are also scheduled to participate. With regard to our players’ participation, we’ll review the situation and take a call accordingly,” Arun Dhumal, BCCI treasurer, told The New Indian Express.

“In my knowledge and as of now, the Bangladesh Cricket Board (BCB) has not officially intimated the BCCI in this regard. Anyway, whoever is dealing with the issue must be keeping a close watch on the developments,” he added while speaking on deferment of celebrations in the wake of the medical emergency as well.

Read here: Jaydev Unadkat Promises to Give His All for Ranji Trophy Title

On Sunday, Bangladesh Cricket Board President Nazmul Hassan Papon had shared the changed schedule, World XI squad and Indian players’ availability for the much-anticipated series is also in question. The BCB also admitted that the Australian players have not yet confirmed about their participation before urging that Indian players like Rishabh Pant, Shikhar Dhawan, Mohammed Shami and Kuldeep Yadav will play both the games there. He also claimed that there is a chance of India star KL Rahul playing in one of the two matches.

“As of now, the series is on. Obviously, the government’s decision will be final but so far we haven’t received any official communique from it,” the BCB official said. 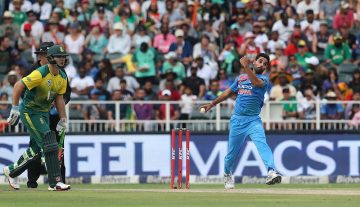