After defeating Royal Challengers Bangalore in their den, Kolkata Knight Riders now gear up to face the table-toppers Chennai Super Kings at their home, the Eden Gardens. The journey so far for Karthik’s men has been up and down while Dhoni’s army has ruled the league so far on the power of their batting strength. Now with the league heading towards playoffs, every match is important.

Here is how the probable XI shapes up

CSK are sitting pretty on the top of the points table. In the 2018 IPL season so far, they have won six out of their eight matches. They also emerged as winners in the last match they played against Kolkata Knight Riders.

In the last match, they made a comeback of sorts against Delhi Daredevils after they had lost a match against Mumbai Indians. Batting first, CSK made a mammoth score of 211/4 and Delhi was left gasping as they came extremely close.

There were as many as four changes in the Chennai team for the last match. They opted for FAF Du Plessis, Karn Sharma, Lungi Ngidi and KM Asif in places of Deepak Chahar, Imran Tahir, Shardul Thakur and Sam Billings. While rest three are likely to keep their places, Sam Billings should come back in for FAF.

KKR is the classic mid-table team in this IPL season. They have won four matches and lost four. Their team is short on back-ups and they cannot afford to make any changes in the playing XI.

In the last match, they came up strong against the Royal Challengers Bangalore team. The bowling of Kolkata kept RCB down to a chasable 175. Lynn-Uthappa-Narine led the charge and later Karthik came in to complete a clinical chase.

They went unchanged in the last match and looking at the resources available, the only possible change is that of Tom Curran replacing Mitchell Johnson. 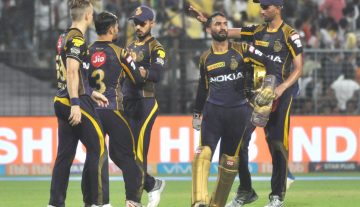