Royal Challengers Bangalore hasn’t off to a good start in the Indian Premier League 2019 and lost both their opening games. This was not the best time to play against the heavyweight Sunrisers Hyderabad, who has been dominating the proceedings in the ongoing IPL. Virat Kohli won the toss and invited Hyderabad to have a bat. David Warner and Jonny Bairstow came out to bat in some mood and scored boundaries in all corners of the park. In the process, both notched up their respective centuries and took SRH’s total to 231/2 in 20 overs.

In response, RCB got off to the worst possible start. They lost three wickets inside the powerplay including the priced wicket of AB de Villiers for 1. Mohammad Nabi was the star with the ball took all three wickets. Virat Kohli got dismissed by Sandeep Sharma and Moeen Ali followed him the next ball as he ran himself out. Rest was the formalities as RCB got bundled out for 113 and SRH won the game by 118 runs.

After failing to convert a good start into a big innings Bairstow didn’t let this opportunity go. English batsman came to bat with all guns blazing. He went after RCB’s bowlers since the first ball. Bairstow was timing the ball well and punished the bowlers in all corners of the park. In the process, he raced to his maiden IPL hundred and reached there in just his third IPL innings. He scored 114 runs in just 56 balls, where he hit 12 fours and seven sixes.

Since returning in IPL 2019, Warner has never looked out of form. After scoring back-to-back fifties in his first two matches, SRH opener scored a hundred this time around against RCB. Warner remained not out during his innings, where he scored 100 in 55 balls including five fours and five sixes. He shared a mammoth 185-run opening partnership with Bairstow.

When RCB came to chase the mountainous target of 232, Mohammad Nabi didn’t allow them to put pressure back on Hyderabad. Nabi dismissed Parthiv Patel and Shimron Hetmyer, new opener, off successive balls. Three balls later, he clean bowled AB de Villiers as well and crushed the last hope for RCB. He finished his spell with four wickets while he conceded only 11 runs in his four overs. 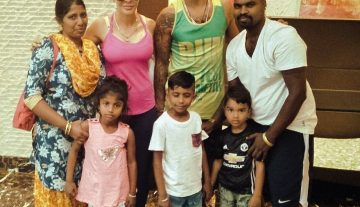