Rajasthan Royals gave breaking news just before their game against Mumbai Indians as they asked Steve Smith to lead the side in the remainder of the tournament. And they saw a change in fortune immediately. Steve Smith won the toss and asked Mumbai to bat first. Rohit Sharma couldn’t bat too long and scored just five runs before giving his wicket to Shreyas Iyer. Quinton de Kock looked good from the other end to share a 97-run partnership with Suryakumar Yadav. In the process, former notched up yet another fifty in IPL 2019 but fell just before the death overs. Hardik Pandya tried his best to give Mumbai a final flourish and only managed to take their innings to 161/5 in 20 overs.

Rajasthan started their run-chase on a positive note where Sanju Samson was the dominator. Ajinkya Rahane played a typical-Rahane innings to score just 12 runs. Samson fell in an attempt to accelerate in Rahul Chahar’s over, who dismissed Ben Stokes few balls later. Steve Smith looked positive and formed a match-winning partnership with Riyan Parag. Smith remained unbeaten on 59 runs to take his team home by five wickets. Have a look what tuned out to be the reasons which cost Mumbai the game.

Jofra Archer’s spell at the death

Mumbai Indians were well set to unleash themselves in death overs. They were 112/3 in 15 over and were eyeing to score something around 180. But Jofra Archer proved to be a thorn in their hopes. He bowled three out of those five overs, where he leaked just 16 runs while he dismissed dangerous Hardik Pandya. Had there not been a six off his last ball, the figures would have been more impressive. Archer’s spell reads 4-0-22-1.

Watch – Rahul Chahar dismisses Samson and Stokes in the same over

When Rajasthan lost their three wickets for 77 runs, Steve Smith opted to play anchor’s role as required run-rate was not an issue for them. The newly appointed Rajasthan skipper shrugged his bad form off and scored a match-winning half-century. He scored 59 runs in 48 balls, where he hit five fours and one six. He held his wicket when his team was in a spot of bother and shared a crucial partnership with Riyan Parag to his team over the line. 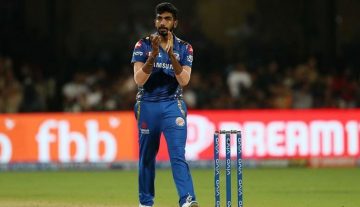