The Rajasthan Royals (RR) locked horns with Mumbai Indians (MI) at the Sawai Mansingh Stadium in Jaipur for the second time in the ongoing season of the Indian Premier League (IPL). After winning the toss, the RR skipper, Steve Smith asked the visitors to bat first. However, the visitors lost their skipper, Rohit Sharma, in the third over of the match itself and ended in them losing the game by 5 wickets.

During the toss, the MI skipper revealed that they have made just one change to their squad as Mayank Markande came in the squad for Jayant Yadav. However, Rajasthan made as many as three changes to their squad as Steven Smith, Ben Stokes and Riyan Parag came back in the squad in place of Jos Buttler, Ish Sodhi, and Rahul Tripathi.

WATCH – Eventful Over Of Jaydev Unadkat Resulted In Pollard’s Wicket

Rohit was dismissed by Shreyas Gopal in the third over, after his dismissal, Quinton de Kock along with Surya Kumar Yadav added 97 runs for the second wicket before the latter getting out in the 14th over by Stuart Binny. Even in the very next over De Kock was also got out and again the bowler was Gopal. Hardik Pandya and Kieron Pollard were batting at the crease and the 17th over turned out to be an eventful one and Jaydev Unadkat had the last laugh as he dismissed Pollard.

After Pollard’s wicket, Hardik and Ben Cutting kept on slogging the RR bowlers as the smashed Unadkat for 19 runs, before Hardik getting dismissed by Jofra Archer in the final over. Cutting helped Mumbai to reach the total of 161/5 in their quota of 20 overs.

During the chase, Rahane and Sanju Samson started off well as they smashed 29 runs for the opening wicket under 4 overs. Rahane was dismissed by Rahul Chahar in the 4th over. However, then Smith added 37 runs for the second wicket as Chahar dismissed Samson in the 8th over and just after a couple of balls he got the prized wicket of Ben Stokes as well.

WATCH – Chahar Dismisses Stokes And Samson In The Same Over

After Stokes dismissal, surprisingly, Riyan Parag came out to bat and he along with Smith took decided to take Rajasthan over the line as they built a partnership of 70 runs for the 4th wicket before the youngster getting run-out in the 18th over. However, Jasprit Bumrah dismissed Ashton Turner for anther olden buck, but the game was completely in RR’s hands and they went past the line with 5 balls to spare in the final over of Lasith Malinga.

Have to admit that Shreyas Gopal is the find of the tournament, he has been brilliant so far but hasn't got any team support! @rajasthanroyals look good at the moment#RRvMI

Loving what I see of Riyan Parag. Only 17 and already so confident! #RRvMI

What a chase by RR. ❄️ Anchored by their new captain Steve smith and the 17 year old Riyan Parag. So RR defeated MI twice this season and keep their hopes alive for playoffs. Rahul Chahar and De Kock in their last few games have been extremely good for MI. #RRvMI pic.twitter.com/nxj1tydHw7

People wondering why we haven’t seen Riyan Parag more this season. He’s 17 and #RR have been playing night games, and he didn’t get a note from his family to stay out late🤓

Steve Smith is a different batsman when he is captaining the team. High class batting from him today along with the young Riyan Parag. Much needed win for #RR #RRvMI #IPL2019 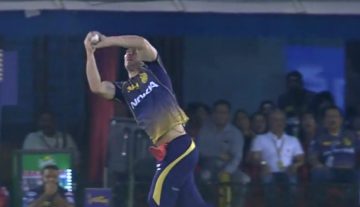