The Rajasthan Royals (RR) became the third team to be eliminated from the 12th edition of the Indian Premier League (IPL). Under the leadership of Ajinkya Rahane, RR witnessed a one-sided loss against the Delhi Capitals (DC) by a huge margin of five wickets at the Feroz Shah Kotla. Barring Riyan Parag, the Royals’ batsmen were way out of color and despite some decent bowling, they lost the game with 23 balls to spare.

Rajasthan lost their skipper in the 2nd over of the game as Ishant outplayed him with a slower ball and Shikhar Dhawan took a comfortable catch at fine leg. In the next over of the Ishant, RR lost Liam Livingstone as well as the bowler cleaned him up on the penultimate ball of the over.

However, a huge mix up took place between Mahipal Lomror and Sanju Samson on the second ball of the 5th over of Axar Patel which ended in the dismissal of the latter. Soon after that, RR was struggling at 57/4 at the end of the 11th over and the troubles increased further in the 12th over of Amit Mishra who dismissed Shreyas Gopal and Stuart Binny on back-to-back deliveries.

Mishra almost completed the hat trick as well on the 4th ball of the over, but Trent Boult dropped the catch of Gowtham. Eventually, RR managed to play out the 20 over with the help fo maiden IPL fifty by Riyan Parag as they scored 115/9.

During the chase, Delhi lost both their openers, Dhawan and Shaw in the 4th over itself as Ish Sodhi got both of them on back-to-back deliveries in his first over itself. However, in the very next over, Iyer smashed Sodhi fir back-to-back sixes and it seemed like an act of revenge, but he was soon dismissed by Shreyas Gopal.

However, then Pant took the host over the line in the 17th over with a six. Meanwhile, Delhi lost Colin Ingram in the 14th over.  With the win, DC has now reached the top-2 rankings in the IPL 2019 points table.

Here is how Twitter reacted to the dismal performance of RR:

Stuart Binny once played against Parag Das in a Ranji Trophy match. Now playing with his son Riyan Parag in the same side in the IPL! #IPL2019#DCvRR

Most sixes for Delhi in IPL:

Youngest Players At The Time Of Maiden IPL Fifty:-

Rishabh Pant gets it done. 🔥🔥

Imagine if DC hadn't lost that 7/8 vs KXIP earlier in the tournament!#DCvRR #DCvsRR #IPL2019

Rishabh Pant has it done yet again for Delhi. Delighted to watch this version of Rishabh Pant. Well played 👏✌️ #DCvRR pic.twitter.com/fa3jPRKtF6

Always have believed if you're good enough, you're old enough.#WC2019Squad #IPL2019 #DCvRR

Brilliant knock by #RishabhPant. He has learned how to take his side over the winning line. Blockbuster of a player – no doubt! #IPL2019 #DCvRR

Very good knock Rishabh Pant 👏👏
Tough pitch, slow start, he was 0(9) once but didn't panic. Took calculated risks which paid off & in the end saw his team home. Cool, calm & composed. That's how we expect you to adapt to situations. Well played 👏#DCvRR #Pant

Kudos to Rishabh Pant. Being his fan have been waiting for long for him to finish a game. Today he did. With a flourish. A six over mid wicket. 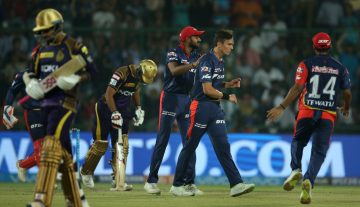