The intensity of the Indian Premier League (IPL) 2020 action has been increasing with each passing match and it will be further intensified when two big teams, Chennai Super Kings (CSK) and Delhi Capitals (DC) will be locking horns with each other at the Dubai International Cricket Stadium. Despite being bogged down by a few personnel and form concerns, CSK won their first match against Mumbai Indians (MI). However, Rajasthan Royals (RR) spoiled the party for CSK earlier this week in Sharjah.

Although they will be missing Ambati Rayudu and Dwayne Bravo for this game, the Super Kings are well-equipped in all departments under the captaincy of MS Dhoni. Their opponents, Delhi Capitals had Marcus Stoinis to thank for their thrilling Super Over win against Kings XI Punjab (KXIP) last week. Despite getting the crucial win, there is a lot of room for improvement in the batting unit of DC with Shimronf Hetmyer and Prithvi Shaw eyeing a return to form in this fixture.

As for DC’s bowling unit, all eyes are on Ravichandra Ashwin, who got injured in the last game. CSK will have fond memories of facing the revamped Delhi franchise with the Dhoni-led side beating DC on three occasions in IPL 2019. However, Delhi Capitals have added much-needed experience to their roster and might even head into this game as slight favorites.

The first impression of the pitch in Dubai – from the DC-KXIP fixture – is that batsmen who can take time and settle in are likelier to succeed off than those looking to go bonkers towards the end. For CSK, this should come as music to their ears for teh veterans in their squad.

Ruturaj Gaikwad will be expected to is set for another chance as Stephen Fleming stated that the franchise will also be expecting the comeback of Ambati Rayudu to be fit only by their next fixture against SRH, which is a week away on October 2. Dwayne Bravo also is said to be ‘progressing well’ and should be in contention to play against the Sunrisers.

Ishant Sharma has been all but ruled out by DC assistant coach Mohammad Kaif, while Ravichandran Ashwin was seen practicing n the eve of the fixture before a decision is made. Should Ashwin not pass fit, Amit Mishra is a likely replacement.

Mohit Sharma played DC’s as a replacement of Ishant, but could yet make way for a quicker fast bowler in Avesh Khan, after having conceded 45 in his 4 overs. The other possible advantage of picking Avesh is in having three pacers – Avesh, Anrich Nortje, and Kagiso Rabada – who can hurry the CSK top-order batsmen with express pace. 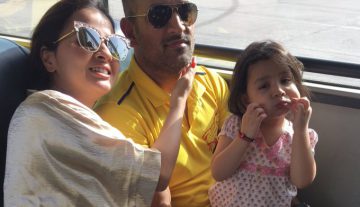 Social Shots
By CricShots - Nov 19, 2019
CSK Does A Special Wish For Sakshi Dhoni On A Her Birthday