Delhi Capitals got off to a flying start thanks to their star openers Shikhar Dhawan and Prithvi Shaw. Dhawan got out Josh Hazlewood in the third over but by then Shaw had gone off to a dashing start. Shreyas Iyer had a poor outing as he scored only 1 run and played 8 balls for it as Hazlewood dismissed him as well.

Meanwhile, Shaw looked like a man on a mission and didn’t let CSK bowlers settle down. He scored boundaries at will and scored fifty in just 27 balls. He got out after scoring 60 runs in 34 balls where he hit seven fours and three sixes. A flurry of wickets put DC in a tricky position as they were 80/4 in 10 overs.

Shimron Hetmyer and Rishabh Pant took the charge from there on and shared 83 runs for the fifth wicket. Hetmyer got out after scoring 37 runs in 24 balls but Pant was determined to take DC to a good total. DC skipper scored an unbeaten 51 runs in 35 balls and took Delhi Capitals’ total to 172/5 in 20 overs.

Superb comeback from #DelhiCapitals. That was a superlative stand between Pant and Hetmyer. Bit of dew acc to Hazlewood so #CSK will hope it increases with time. Their openers hold the key tonight #DCvsCSK #IPL2021

Rishabh’s 15th half century’s completed today in his total ipl career & 3rd in this ipl, soo proud of you my boy 🥺♥️ #DCvsCSK #IPL2021

172 in such a game, is a decent total considering where #DC where after 4 wickets. And considering they picked the extra bowler, they’ll be confident to defend it. Need quick wickets & control from the spinners #DCvsCSK #CSKvsDC #IPL2O21 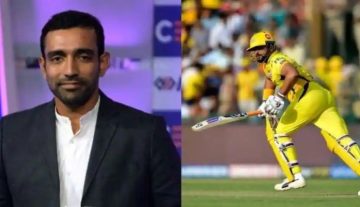