While the fourth Test between India and England is currently going on The Oval, England speedster James Anderson was seen bowling with blood on his knee and appeared to cut his right knee as well. Blood was visible on his trousers also. 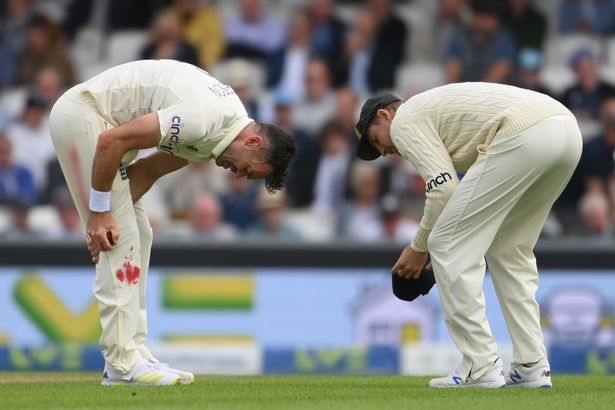 However, despite the injury, he continued to bowl and did quite well for England bowling performance on day one. He was a part of a four-member pace attack including Ollie Robinson, Chris Woakes and Craig Overton. And, they picked up six wickets in the first two sessions as well.

While Woakes provided with the initial breakthrough with Rohit Sharma caught behind in his first over, Robinson dismissed KL Rahul, getting him out LBW for 17 as well. And, then James Anderson got Cheteshwar Pujara caught behind for just four.

However, India could manage 191 runs in their first innings with Shardul Thakur top-scored with 57 off 36, including 7 fours and 3 sixes. India captain Virat Kohli has finally scored a fifty, the second time in the series before Robinson dismissed him.

Before the toss, Virat Kohli said: “We would have bowled first as well but toss isn’t something you can control. Need to be prepared for either. We’re looking forward to putting runs on the board. Two changes – Ishant and Shami have niggles – Umesh and Shardul are back. For us, it’s about partnerships, we can’t focus too much on individuals. The opening partnerships have been good, it’s about getting more partnerships. We got a few days left on this tour, the series is poised nicely and there is going to be no shortage of effort from our side.”

Joe Root said: “We’re going to bowl first. Going to make use of the overhead conditions. Looks like a good morning for bowling, we need to still hit the right lines and lengths, like we did at Headingley. We’ve got two changes – Ollie Pope in for Jos Buttler and Chris Woakes comes in for Sam Curran. Chris (Woakes) knows his body well and we all know about his performances. (On being the top-ranked batter) It does feel nice but obviously has no standing on this game.”