While an Ashes series generally has a lot of tense moments, Day 4 of the ongoing fourth Test saw a light-hearted moment. Having said that, it caught everyone off-guard. Seldom would you find a spinner bowling a bouncer, which forces the batter to duck? The fact that it was bowled by Joe Root, who happens to be a part-time bowler, makes it even more astonishing.

The incident took place during the 47th over of the third innings. Joe Root was bowling his first over to Usman Khawaja, who was batting on 35. While bowling the final ball of the over, the English skipper thought of bowling a bouncer out of nowhere, and it left Usman Khawaja stunned.

As a matter of fact, even the stand-in wicket-keeper Ollie Pope was surprised by the bouncer. It is to be noted that both, Jos Buttler and Jonny Bairstow weren’t on the field at that time, and thus, the substitute player was doing the glovework. Thus, both, the batter as well as the bowler, had a laugh about it.

Are you asleep and dreaming or is that a Joe Root bouncer 🔥#Ashes #PinkTest pic.twitter.com/PHVRx2YBcB

Moreover, even the commentators started laughing and applauded Pope for managing to catch the ball. Post this delivery, the over ended and both the teams went for their tea break. However, what followed was absolute carnage. Usman Khawaja, alongside the youngster Cameron Green started going berserk over the English bowlers.

While the all-rounder got to his half-century, the Queensland batter got to his second century of the game. In what comes as a surprising stat, in just one match, he has now scored more runs than every English batter except Joe Root in this series as of now.

Cameron Green was then dismissed after playing a phenomenal knock of 74 runs in 122 balls. When Alex Carey was dismissed off the next ball, Cummins declared the innings. The Root-led side now has to chase 388 in the fourth innings. While the task seems difficult to say the least, the Poms would definitely look to salvage some pride. 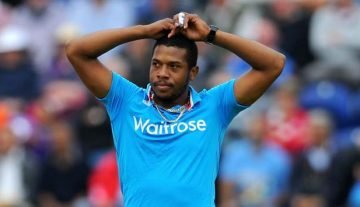