The chief Indian selector, MSK Prasad announced T20I and Test squads for the upcoming Bangladesh series. Apart from the squad selection, all eyes were on Dhoni’s future as well with Sourav Ganguly, the new BCCI President, expressing that he will be discussing with the selectors regarding the same. Moreover, the reports also surfaced on Thursday that the veteran will return to action in January next year.

However, if the recent reports are to be believed, Dhoni won’t be picked ever again unless he asks for a farewell series. He played his last international game for India in the World Cup semi-final against New Zealand and has been on a sabbatical since then. He was recently spotted in India’s dressing room after the Ranchi Test against South Africa.

As per the reports of Mumbai Mirror, Dhoni will not be selected for Team India ever again. But he was seen training in the gym at the JSCA stadium in Ranchi and it was also reported that he will be training with the U-23 team soon. Having said that, none of the stakeholders have spoken clearly about his international future.

Even Ganguly cleared that retirement is purely Dhoni’s call. The Indian skipper Virat Kohli previously stated that he will be welcome his predecessor whenever he is available. Ther have also been rumors about the 38-year-old’s cricketing future though he is least bothered about it and has kept himself busy in his personal life.

ALSO READ: MSK Prasad Talks About The Future Of Dhoni, Pant, And Bumrah

The Indian selection committee has been trying to find a proper replacement for him. Rishabh Pant has been given a lot of changes already and even Sanju Samson has been picked now for the Bangladesh T20Is. With Virat Kohli rested, it will be interesting to see if both the wicketkeepers get a chance in the playing XI. This also provides a brilliant opportunity for Samson to seal his place in the Indian team. 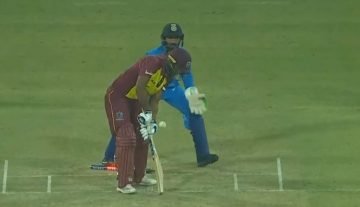 Videos
By CricShots - Nov 6, 2018
WATCH – Kuldeep Yadav Gets 2 Windies Wickets In An Over