UAE registered one of the upsets of the tournament after beating Namibia by seven runs in Geelong to stop their opponent’s progress through to the Super 12 stage of the ongoing T20 World Cup as well. Namibia’s shock defeat saw that the Netherlands joined Sri Lanka, their opponents earlier in the day, in the Super 12 stage of the mega event as well. And, after that, the Dutch players were involved in a wild celebration after UAE beat Namibia and they got out of the tournament to ensure their qualification. 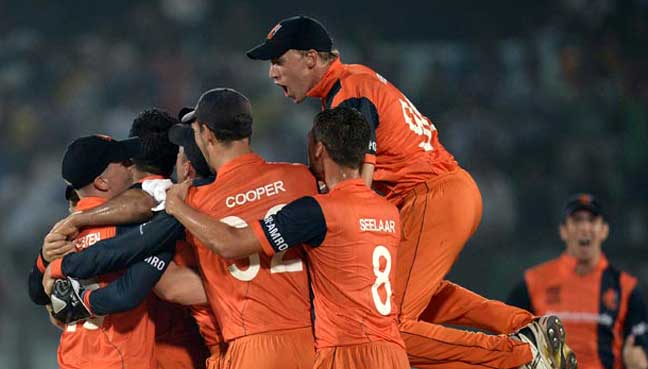 The Netherlands suffered a defeat against Asian Champions Sri Lanka earlier in the day, seemingly ending their campaign since Namibia were heavy favourites against UAE in the afternoon game as well. But dejection turned into elation after Namibia lost the match.

The Dutch players were hooked to the game after another thrilling encounter in the ongoing Group Stage of the T20 World Cup. The match was in the balance until the very last over when Namibia needed 14 off six deliveries to qualify for the next round. David Wiese had the UAE bowlers before Muhammad Waseem did well in the final over to the delight of the Dutch cricketers, who got together in a huddle to celebrate their qualification as well.

Celebration by the Dutch cricket team, having just qualified for the follow-up by the narrow defeat of Namibia by UAE. Yet another nail biting experience. #ICCT20WC2022 #ICCT20WC @T20Worldcup #Australia #CricketNL @KNCBcricket pic.twitter.com/pVNjMVYgUG

“It was tough bowling at the death after so long, but I was always confident. I think the way we bowled the second-last over, we got back into the game. The plan was to keep it straight as the boundaries in front of the wicket were very long. The previous two games also we were in winning positions, we could have won them. Very happy to have won a World Cup game for the first time,” Muhammad Waseem said after being named the player of the match against Namibia.