Former India captain MS Dhoni has started his training in Ranchi for the upcoming season of IPL 2020 edition which starts in March. However, former BCCI president and the current vice-chairman and managing director of India Cements (owners of CSK), N Srinivasan has confirmed that Dhoni will play for Chennai Super Kings in the 2021 edition as well.

“People keep saying when will he… how long will he play, etc. He will play. I can assure you. He will play this year. Next year he will go the auction; he will be retained. So there is no doubt in anybody’s mind,” Srinivasan was quoted as saying by ESPNcricinfo.

In his return to training recently, MS Dhoni has stunned Jharkhand coach Rajiv Kumar with his stunning batting. It was Dhoni’s first time with the bat ever since India’s loss in the semifinal of the 2019 World Cup against New Zealand in July last year.

“I will be honest… I thought there will be a bit of rustiness as Dhoni has not trained for quite some time. The last time we had spoken, he had said that he would start in January and here you go. He is a man of his words and it came as no surprise that he was out there training with the guys just like any other regular Jharkhand player. But what surprised me most was how he middled almost every ball, be it in the pacer’s net or the spinner’s net. He even took throwdowns just like a player going through the batting drills does,” he added.

“I haven’t had any talks with him with regards to the national team and him donning the India jersey again. But, his preparations for the next edition of the IPL has begun and while the senior team will be busy playing the Ranji Trophy game from Sunday, Dhoni will continue training till the time he is in Ranchi,” the coach shared.

India’s head coach Ravi Shastri had also shared to India Today recently that Dhoni remains in contention for the T20 World Cup despite his absence from international cricket for quite some time.

“If he decides to play, which he will because he will play the IPL, then he will start with a very fresh mind and very clear ideas. Then you’ve got to see form. If he has a great IPL and puts himself into contention that ‘I’m available for selection’, then you don’t fool around,” Shastri had shared. 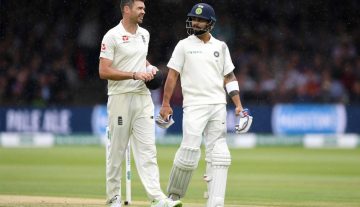 News
By Sandy - Sep 4, 2018
James Anderson claims Virat Kohli is one of the best players in the world right now