Out-of-favour India wicket-keeper batsman, Parthiv Patel went on to recall an incident from the 2004 ODI series when he sledged the Australian opener, Matthew Hayden. During an interaction with Fever Network’s 100 hours 100 stars, Patel recalled he had said “hoo hoo” when Irfan Pathan had dismissed the southpaw after he had got a century and was walking back to the dressing-room at Brisbane.

Parthiv asserted, “I was carrying drinks in Brisbane, it was the match in which Irfan Pathan got him out. He had already scored a hundred, and it was a crucial stage when Irfan got him out. And I was just passing him by and I did a “hoo hoo” to him.”

The veteran gloveman also went on to acknowledge that getting a scolding from the Aussie as the gesture did not go down well with him.

Patel said, “He got so angry at me. He was standing at the Brisbane dressing room which is like a tunnel. He was standing there, and he said ‘if you do this again, I will punch your face’. I said ‘sorry’, I stood around and he went off.”

The two then went on to play for the Chennai Super Kings (CSK), four years after that incident. He also revealed that the two became good friends. Patel said he also got invited by Hayden at his home in Australia for dinner after the IPL.

Recalling the same, Parthiv said, “Yeah, Hayden wanted to beat me up in Brisbane. But we became good friends after that. We played a lot of cricket together at CSK. We enjoyed each other’s company. Opening the batting was fun with him. We’ve had good times off the field as well. So we patched up after that Brisbane incident. Even after the IPL finished, I went to Australia with an emerging side. Hayden called me home, prepared chicken biryani and dal for me.” 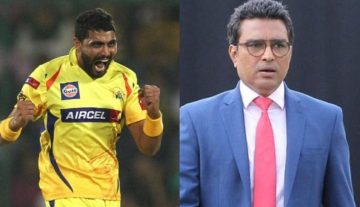 Social Shots
By CricShots - Mar 14, 2020
CSK Took A Dig At Sanjay Manjrekar After Being Sacked