Rajasthan Royals (RR) continued on with their good vein of form in the Indian Premier League (IPL) 2022 and picked up their second win against the Mumbai Indians (MI) on the first of Saturday’s double-headers. The match was notable for Rajasthan opener Jos Buttler scoring his second IPL century- the first one of this season- and powering RR to a convincing 23 run win.

It wasn’t all bad for Mumbai, though- who are well-known slow starters- albeit they would’ve liked to get a win under their belt. For one thing, their budding middle-order batter, Tilak Varma, compiled yet another impressive performance. The 19-year-old Hyderabad southpaw fashioned fine innings of 61 runs off just 33 balls.

WATCH – Shubman Gill Cusses Badly After Getting Dismissed On 84

Tilak’s knock featured as many as five sixes; the latest of which came against R Ashwin, who struck back on the very next ball to give Tilak a taste of the intense competition that awaits him in the IPL. During the 15th over of the run chase, Tilak timed a reverse paddle scoop to brilliant perfection and sent the first delivery of Ashwin’s over into the stands.

It was quite evident that R Ashwin wasn’t happy with the shot as didn’t like to be dominated by an IPL newbie. And as if on cue, he got his revenge on the very next ball, by bowling on a similar line at a much slower pace. Young Tilak didn’t manage to get any bat on the Ash’s perfect off-spin and ended up getting clean bowled.

It was clearly an opportune wicket that the Royals were looking for, and it showed from the way Ashwin reacted. Normally a composed customer, Ash’s reaction was brimmed with sheer passion, and he even proceeded to send off the young man back to the hut with a send-off. Here’s the video of R Ashwin giving a send-off to Tilak Varma: 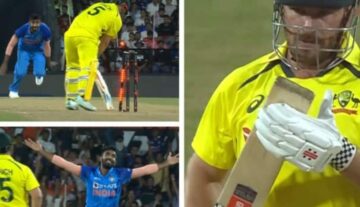