Videos
Rahul Dravid Gives His Verdict On England Getting Successful WIth ‘Bazball’ In Tests
By CricShots - Jul 6, 2022 2:14 pm
Views 7.7K

Team India registered a seven-wicket loss against England in the rescheduled final match of India’s Tour of England 2021. The attacking intent of the English batters left the Indian bowlers clueless as they managed to take just three wickets in the 4th innings. After the match, Rahul Dravid was asked about England’s unique approach after the appointment of Brendon McCullum as their head coach and Dravid’s reply make journalists burst into laughter.

Team England has entered a new era with Brendon McCullum as their head coach and Ben Stokes as the new full-time captain in the longest format. The mindset with which the English team is approaching Test cricket has got the cricket fraternity talking. The same was seen in the 5th Test match against India where Stokes opted to chase after winning the toss.

Dravid gave an apt reply when asked about ‘Bazball’ which made journalists burst into laughter. This was the first Test game for Rahul Dravid as the head coach of the Indian team, which looked in complete control of the game until the 4th Day. Indian batsmen faltered in the second inning and were folded up on just 245 runs. Though the target of 378 was daunting, English batsmen achieved it like it was a cakewalk. In a press conference, Dravid was questioned about ‘Bazball’ and journalists burst into laughter after his reply.

ALSO READ: Ravindra Jadeja Pleased To Perform For The Team Even In Lows


He further added, “Whatever brand of cricket one wants to play, it depends a lot on the players and the kind of form they are in presently. When the players are in good form, you obviously play a more positive game, like we did in that innings where pant and Jadeja were batting.”

Both the teams will now engage in a 3-match T20I series which will be followed by an ODI series with as many matches. The T20I series will go underway from 07th July and then the ODI series will begin from 12th July. Team India will look to exact revenge in the shorter formats after losing the last Test match and losing an opportunity as well to win a Test series in England. 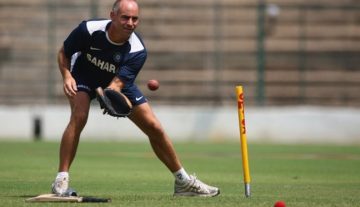 News
By CricShots - Aug 5, 2022
Paddy Upton Reveals The Two Most Professional Cricketers He Has Come Across