Ponting recently joined the micro-blogging website Twitter, and was welcomed by his former teammates with aplomb and has gained more than 59 thousand followers in a very short time. Given that the culture of the Australian cricket team, he also got a nickname that has stuck with him even till now. He was called Punter for some reason, he recently revealed the story behind it on Twitter.

The word punt in Australian lingo means to place a bet on something usually on horse races or dog races.  Ponting is an avid fan of betting on dog races and regularly placed money on greyhound dog races and horse races and this led his teammate Shane Warne to come up with a nickname of Punter based on it. The moniker stuck with the Australian skipper even till now.

On Twitter, Ponting elaborated the fact when asked by a fan. He tweeted, “We were getting paid $40 a month when we were living at the cricket academy in 1990. I used to go to the TAB to have a bet on the dogs and @ShaneWarne gave me the nickname”.

We were getting paid $40 a month when we were living at the cricket academy in 1990. I used to go to the TAB to have a bet on the dogs and @ShaneWarne gave me the nickname https://t.co/uY61XKaEAx

Well, Ponting usually had a keen cricketing mind while leading one of the most successful teams of the 2000s which ruled the world and even his risks on the field paid off quite handsomely. In led the Australian team in 77 games, Ponting led Australia to wins in 48 matches, while in 230 ODI matches, he won 165 matches and lost 51 ODIs. He also won two World Cups as captain in 2003 and 2007, while being part of the 1999 World Cup-winning team as well. 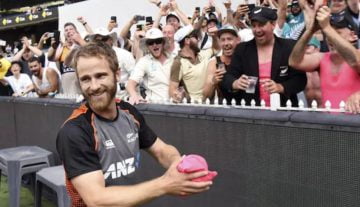 Social Shots
By CricShots - Dec 30, 2019
WATCH – Kane Williamson Does A Brilliant Gesture For His Fan At MCG