“Fantastic, I think to score triple hundred in any kind of cricket is a great thing, a great achievement,” Dilip Vengsarkar told reporters here. “He (Sarfaraz) must have played extremely well. I didn’t see the innings, because I wasn’t in Mumbai that time. And to chase 600 runs, I think, I have seen that after a long time.”

On the other hand, Mumbai players Rohit Sharma, Shreyas Iyer, Shivam Dube and Shardul Thakur are on national duty whereas Mumbai captain Suryakumar Yadav and youngster Prithvi Shaw are playing for India A in New Zealand now. However, Vengsarkar said he was glad that Mumbai players doing well.

“It is a fantastic achievement. See to chase 600 is a big thing. It is good for Mumbai cricket because few players are playing for India, few for India A, so others will (have to) raise their bar and that is important,” said Dilip Vengsarkar, who has played 116 Tests for India. “That is what I had expected from Mumbai players. I am very happy. I am very proud of them (the team).”

Mumbai will take on next Himachal Pradesh in an away encounter in Dharamshala which will begin from January 27. For the record, in 1981-82 season, Karnataka had made 705 and Delhi had surpassed it by scoring 707 for 8.

“I wasn’t going to come out to bat. I wasn’t well for the last two-three days. But I felt that I was the kind of player who could change the game if I remained in the middle. So I came out and played for the team,” Sarfaraz Khan said after scoring the triple-ton. “I didn’t think I would be able to go all the way. When I got to 250, I felt I should declare (retire), but the team backed me a lot,” 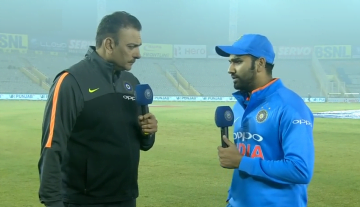