At one stage in the third T20I against Sri Lanka in Pune, India pacer Shardul Thakur had performed really well. He finished with two wickets in Pune after a quickfire eight-ball cameo with the bat that saw him add 22 important runs, which eventually helped him earn the Player-of-the-match award. Thakur had the highest strike rate (275) in the innings as well.

“I believe I have the ability (to bat) and recently I’ve been practising well. The idea is that if I can contribute runs at No.8 it’ll be good for the team,” Shardul Thakur said after the match.

While talking about his bowling, he explained that swinging the ball irrespective of the conditions is something that has helped him a lot.

“I can bowl good outswingers, so initially the idea is to swing the ball. If you swing the ball in any conditions, you can get wickets,” he added.

Read here: Chris Gayle Would Love to Carry On as Long as Possible

Along with Thakur, another young fast bowler, Navdeep Saini was also impressive and won the Player of the Series.

“Speed is natural to me. But now I’m paying attention to my diet, eating and sleeping, training. You need that to be able to play for India. I’ve played with the red ball for the last four-five years only. Before that I was playing with tennis balls,” a visibly delighted Saini shared.

Saini, like Shardul Thakur, finished with five wickets in his two games and believes he is now more comfortable with the limited-overs formats as well.

“When I was playing only with the red ball, I used to find it very different to bowl with the white ball, but I’m feeling better with it now. And my bowling partners also help me with suggestions and ideas on what to do,” he added. 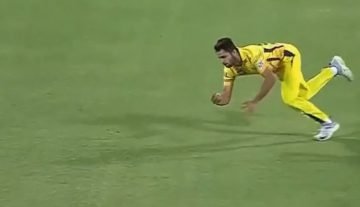