Australia have named a 14-member T20I squad for the upcoming three-match series against Sri Lanka and Pakistan. Steve Smith, David Warner, Pat Cummins and Mitchell Starc have named in the T20I squad as Australia start preparations for the upcoming T20I World Cup which is scheduled to play next year in October. However, Chris Lynn and Marcus Stoinis excluded from the squad while Adam Zampa and Ashton Agar have been named in the squad.

“It is almost a year to the day until Australia hosts the men’s Twenty20 World Cup and we have selected this squad with that in mind,” National Selector Trevor Hohns said in a statement. “We have looked to put a squad together that we think can take us through to that tournament. The squad we have selected is quite role specific and we believe it gives us the flexibility to thrive in all match conditions.”

“In terms of batsmen, we have selected top and middle-order specialists. The likes of Glenn Maxwell, Ben McDermott, Ashton Turner and Carey provide us excellent options through the middle-order after Finch, Warner and Smith,” said Hohns. “In terms of spinners, we feel like the all-round package Ashton Agar possesses is irresistible at the moment and Adam Zampa has proven to be a very good T20 bowler in all conditions.”

“We’re also confident in the potency and flexibility of our fast bowling group. Mitchell Starc gives us a left-arm option and has earned a reputation as one of the world’s leading quicks at the top of the innings and at the death. Pat Cummins is a world-class right-arm option and has been in superb form of late. Andrew Tye is a wicket-taking proposition, Billy Stanlake has the X-factor and Kane Richardson has been an excellent short-form player for some time now,” he concluded. 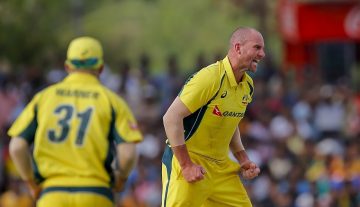 Article
By CricShots - Oct 6, 2017
John Hastings Hangs His Boots From ODIs and Tests