England pace-spearhead Stuart Broad played a pivotal part in England’s 2-2 Ashes series draw, as the 33-year-old ended the series with 23 wickets in five-test series. After his stunning performance, he credited former New Zealand all-rounder Richard Hadlee’s role for this. Broad, who grew up idolizing Hadlee, had asked his advice from him during England’s spin-dominated series in Sri Lanka last year.

“He sent me a detailed, two-page email in reply about why he changed and what he did. It was awesome. That in particular was what inspired me to go for it,” Stuart Broad wrote for the Daily Mail in January.

During that series, Broad had surpassed Hadlee’s record of 431 wickets, but he wanted to prolong his career by reducing his run-up as he wanted to make himself, “more compact at the crease and heightening the release position”. Hadlee too was eager to help the pacer and helped him.

“I can’t take any credit because advice is advice, and you’ve still got to get out there and adapt and perform. He’s absolutely done that,” Hadlee told Stuff. “I’ve written a piece for his [Broad’s] benefit programme saying I might be asking him for advice now.”

In the absence of James Anderson, Broad played a crucial role and finished the second-highest wicket-taker after Australia’s Pat Cummins (29 wickets at 19.62) in the Ashes.

“To see him mature and develop and perform the way that he has… he’s on the verge of greatness. He’s passed all the wickets that I got and the bowling combination with Jimmy Anderson make them categorically the most successful new ball attack in the history of the game. It’s an extraordinary performance,” added Hadlee.

“I had to refine my technique and it gave me better rhythm and allowed me to get close to the stumps at delivery. I could hold my position to keep myself more upright. I probably lacked a bit in pace, but I made up for it by being a lot more consistent and reliable. I developed better skills of swing and seam and could still bowl the effort ball, and put batsmen on their backsides. That was what I talked to him [Broad] about,” he concluded. 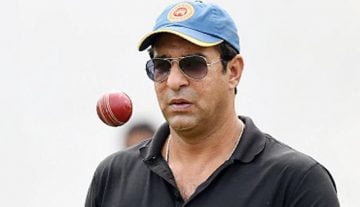 Article
By CricShots - Nov 11, 2017
Wasim Akram Unhapy With ICC For Not Striking A Deal Between BCCI and PCB