Tamil Nadu registered a convincing win and won the third Syed Mushtaq Ali Trophy after defeating Karnataka by four wickets on the final ball at the Arun Jaitley Stadium. The nail-biting win came on the back of Shahrukh Khan who stole the show with a last-ball six.

When 16 needed off the last over, both Shahrukh Khan and Sai Kishore tried their best and took the equation down to five required off the last ball with Khan on strike. And, he smashed one over the square-leg fielder for a six and won the match. While speaking about that, Shahrukh Khan added that he wanted to hit the ball over the long-on fielder.

“There were a lot of things in my mind, but I tried to keep it simple. The ball was rough and the wicket was slow, so I wanted to connect it off the middle. I was waiting to hit it over long-on, and I got the room to get it over square leg. It has been a special thing to hit a last-ball six. I’ll remember this for a long time,” he explained.

However, Shahrukh Khan, who has played for the Punjab Kings in the Indian Premier League, has remained unbeaten on 33 which came off 15 balls, including three big sixes and helped Tamil Nadu win the game while chasing 152 runs against Karnataka.

Although Hari Nishant helped Tamil Nadu with a flying start of a 12-ball 23, his dismissal left them struggling in the middle. Moreover, both of their set batsmen – N Jagadeeshan and the captain Vijay Shankar got out and things became worse as well. But the final-ball six by Shahrukh Khan helped them win.

“We played a bit slow in the middle, but that’s the trend of our team – the roles are well-defined, and the top order had trust in me and Mohammed. He (Mohammed) has been a special talent so thanks to him,” Shahrukh Khan concluded. 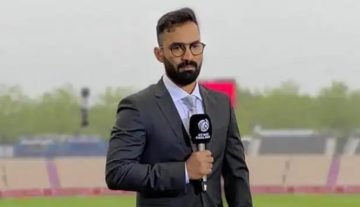 Social Shots
By CricShots - Nov 21, 2022
Dinesh Karthik Unhappy With The Format Of VJT After Tamil Nadu Breaks A Record