New Zealand captain Kane Williamson is considered one of the best batters in recent times. He recently made headlines while playing in the final of the tri-series between hosts New Zealand, Pakistan and Bangaldesh, it was the first two teams that battled it out in the final. After being asked to bat first, New Zealand got off to a great start hitting 51 off the powerplay. Despite losing three wickets, the hosts looked comfortable as they managed to get to a score of 150/3 at the start of the death overs as well.

However, on the second ball of the 16th over, Kane Williamson decided to attack Shadab Khan with a reverse sweep. Meanwhile, the Pakistan all-rounder seemed to have understood the Kiwi’s mind and bowled a brilliant yorker down the leg side as well. Williamson realized he had been outfoxed but showed off his skills as well. He managed to hit the ball to ‘cover’ and managed to add another run to the total.

Kane Williamson said after the game: “Great game of cricket. Pakistan are a very strong side. The way they changed the momentum in their favour was great. Disappointing for us. You always want 20 more runs I guess but the wicket was on the lower side and we have generally operated well this series. Credit to Pakistan, they hit the ball beautifully. There is no blame for anybody (about Sodhi’s 25-run over). It’s a game of small margins.”

“Even for an over that goes for too many, you aren’t far away from changing the game in your favour. That belief is crucial for us. Pakistan are a great team. Nice to make a contribution, obviously you want a few more and want to be on the winning side but it felt good. Got a par total probably, surely wanted a few more but Pakistan’s death bowling was quite good. Guys all did their roles well through the tournament,” he concluded. 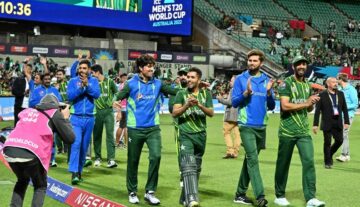 News
By SMCS - Nov 15, 2022
Students in Punjab’s Moga involve in clashes after Pakistan’s loss to England