Former Rajasthan Royals skipper Shane Warne who is the current brand ambassador of Rajasthan Royals has been seen with Royals in their preparation time and also been giving interviews to many big publications. In recent time his interview with IANS he was asked on bowling to Kohli to which he replied.

He would not wish to bowl to either of the Indian batsmen talking about the all-time debate between Virat Kohli and Sachin Tendulkar and also said Viv Richards was the best batsman and would like to test Kohli by his bowling once Kohli gets retired he actually meant.

“Virat and Sachin are two completely different players altogether, but they are greats. None (I would wish to bowl to) actually (Warne laughs). To me both are terrific players, I couldn’t choose one,” he said.

The Australian leg spinner was asked what did he feel Tendulkar’s records could be challenged before Virat Kohli came in the game, to which he replied.

I see it this way Don Bradman unanimously is the greatest batsman of all time , the best batsman i saw was Viv Richards and the best players i have bowled to is Lara and Tendulkar. he think ” that everyone wants to know where does Kohli fit in all this?

For Warne, it is still difficult to decide between Kohli and Vivian Richard who is the best batsman “But he thinks that Virat will have the greatest record by the time he finishes in all forms, he will break all records that’s ever been, Warne said to Hindustan Times.

Talking on Vijay Shankar’s performance, the veteran spinner says that Hardik Pandya should definitely go to the World Cup because he is a match-winner. Vijay Shankar is good but Pandya is a better all-rounder. ‘

Also, Warne commented on Smith and Warner’s comeback that they will be hungry, fresh, raring to go, very determined and would want to lead their bat to the talking, and he feels anyone who thinks Smith and Warner would not perform is Wrong. 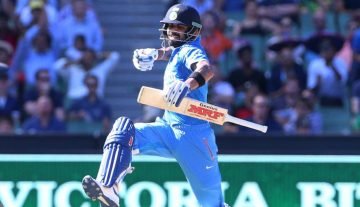 Social Shots
By P - Apr 29, 2018
Watch Virat Kohli Run the Fastest Three, The Challenge is ON!