The Indian skipper Virat Kohli has an immense amount of experience when it comes to batting and because of that, he has often been seen predicting the line and lengths of the bowler. During the third ODI of the five-match series against Australia at Ranchi, Kohli successfully gauged the length of Adam Zampa even before the spinner delivered the ball.

Kohli told his batting partner Kedar Jadhav as Adam Zampa got to his mark to bowl, “He will pitch it short.” On the next ball, Zampa pitched the ball short and Kedar was able to hit it for a boundary. It was the penultimate ball of the 25th over when Jadhav got a four towards the leg-side.

Virat was completely in the zone and he was successfully able to interpret the length of the ball. Kohli recorded his 41st ODI hundred as he batted at the top of his game. Meanwhile, Virat and Jadhav added 88 runs for the fifth wicket but, Jadhav was dismissed by Zampa as he managed to score 26 runs from 39 balls. On the other hand, Kohli was once again at his best and scored 123 runs off just 95 balls.

ALSO READ: Virat Kohli Hints Of The Changes For The Next Two Games

Kohli smashed 16 fours and one six in his staggering knock. However, his inning went in vain as Australia won the match by 32 runs. It was a must-win game for the visitors as they were down 2-0 in the series. Thus, the tourists were able to stay afloat in the five-match ODI series.

Usman Khawaja was awarded the Man of the match for scoring his maiden ODI century. Australia’s captain Aaron Finch got back into form as he scored a fine knock of 93 runs. Kuldeep Yadav scalped three wickets as India was able to pick up the threads in the fag end of the innings.

On the other hand, Adam Zampa took three wickets for the guests. The fourth ODI will take place at Mohali on 10th March. 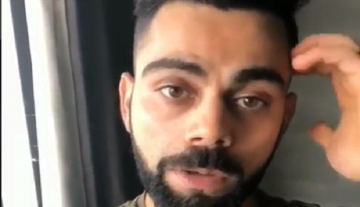