Virat Kohli and his men took less than a week to turn the fortunes in there favor. After facing a huge 10-wicket loss in the first match in Mumbai on January 14, the Men in Blue went on to win the next two games dominantly to pocket the series 2-1. Kohli played a majestic knock of 89 which though was second-best to Rohit Sharma’s 118 in the decider in Bengaluru on Sunday as India thrashed the opponents by seven wickets.

Kohli has said that he was surprised over the fact that Australia didn’t pick their talented batting all-rounder Glenn Maxwell for this short tour. Maxwell, who is currently leading Melbourne Stars in the Big Bash League (BBL) at home has been a match-winner for the Kangaroos in the limited-over format teh last time they toured to India.

Last year, Maxwell was the man of the series in teh T20I series. He is also well-acquainted with the Indian conditions as he plays in the Indian Premier League regularly.

ALSO READ: Sunil Chhetri And His Wife Hosted Virat And Anushka For A Dinner

As per the quotes in Indian Express, talking about Maxwell, Virat said, “Honestly I did not look at the (squad) and I asked Aaron what have you got only 14… and asked ‘Is Maxwell here?’ and they said he is playing the BBL. I was a bit surprised that he wasn’t here, especially the way he performed last time in the T20 series. He got a hundred in the last game and they won the series. So surprised not to see him because he brings the spinning option as well.”

Maxwell hit an unbeaten century in the second T20I against India during their 2019 tour at the same venue to win the series for the visitors. In the recent past, Kohli also praised Maxwell after the latter decided to take a break from cricket to address his mental health, saying it was something “remarkable” on Maxwell’s behalf and urged people to respect his decision.

Meanwhile, Australia captain Aaron Finch said after his team’s defeat in Bengaluru on Sunday that Maxwell is currently out of the top seven Australian batsmen despite his brilliant show with the bat in the BBL. Finch though added that Maxwell could still get a recall. 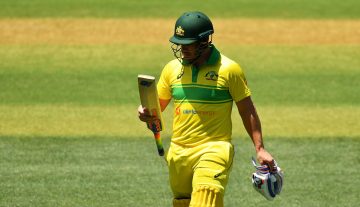