Australia player Steve Smith escaped a weird dismissal during a Big Bash League (BBL) match between Sydney Sixers and Melbourne Stars in Melbourne on Friday. While Pakistan speedster Haris Rauf who plays for Melbourne Stars and his teammates started the celebrations after it looked as if Steve Smith has dismissed with hit wicket, the third umpire gave him not out. The replays showed that it was the wind that blew the bails off. The BBL’s official Twitter account shared the video of the whole incident on Twitter with the caption: “Hit wicket? Don’t think so! The wind has just had a go at getting Steve Smith out!”

Hit wicket? Don't think so! 🙊
The wind has just had a go at getting Steve Smith out! 💨

On the fifth ball of the eighth over from Haris Rauf, Smith hit it awkwardly, and the bails came off at the same time. At first, it was like as if Smith has hit the wicket with his bat. While checking the dismissal, the replays revealed that there was a sudden wind and because of that the bails off.

However, he failed to score big for Sydney Sixers as he got out to fellow spinner Adam Zampa in the 13th over. He scored 24 runs off 18 balls, including two boundaries and a six. However, Smith impressed everyone with his ‘stand and deliver’ six off Marcus Stoinis on the third ball of the 12th over. The BBL account also shared the video of the impressive big six on Twitter.

Adam Zampa claimed three wickets as Melbourne Stars restricted Sydney Sixers within 142/7 in their allotted 20 overs. The home team had elected to bowl first after winning the toss in the crucial qualifier match. 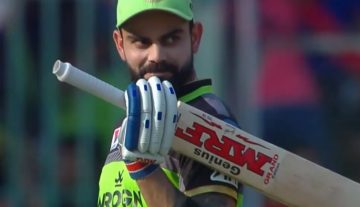