The Big Bash League (BBL) has so far been one of the most entertaining seasons lived up to fans’ expectations as it has provided them with some exciting contest between the bat and ball. The T20 format is often criticized for being a batsman’s game, but the bowlers have also made it look mesmerizing with some spectacular bowling spells, proving the naysayers wrong.

Here are the videos of both the hat-tricks:

Rashid’s hat-trick was spread across two overs. He first dismissed opposition skipper James Vince on the second last ball of the 11th over and then removed Jack Edwards LBW for a golden duck. He had earlier trapped Jordan Silk (16) on the first ball of the 13th over to complete his hat-trick. Despite shining with the ball and Rashid couldn’t help his team to win the match as  Sydney Sixers some nervy moments in their moderate 136-run chase.

The second hat-trick of the day came when Melbourne Stars’ Haris Rauf removed Matthew Gilkes, Callum Ferguson, and Daniel Sams off successive deliveries in the last over of Sydney Thunder’s innings. This was the first hat-trick for any Melbourne Stars bowler in the history of BBL. Rauf was the pick of the bowlers for his team as he scalped 3 wickets and gave away just 23 runs in his four-over spell. His spell also helped Stars restrict Thunder to 145/5 at Melbourne Cricket Ground, Melbourne.

With the help of half-centuries from opener Marcus Stoinis (50 off 44) and skipper Glenn Maxwell’s 59 not out off 37 balls, Melbourne Stars chased down the total quite comfortably, winning the match by six wickets with 13 balls left. They replaced Sydney Sixers on top of the points table after registering their sixth win from seven games. 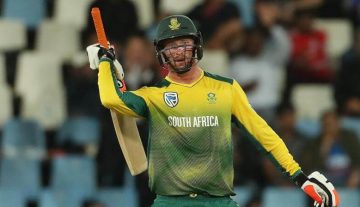