New Zealand captain Tim Southee shared his views on a 5-wicket defeat against India in the first T20I, claiming that they played their best cricket. His comments came as they successfully took the game till the last over of the innings in Jaipur. He also applauded Mark Chapman for his 63-run knock, adding that they were able to post a good score on the board while batting first. 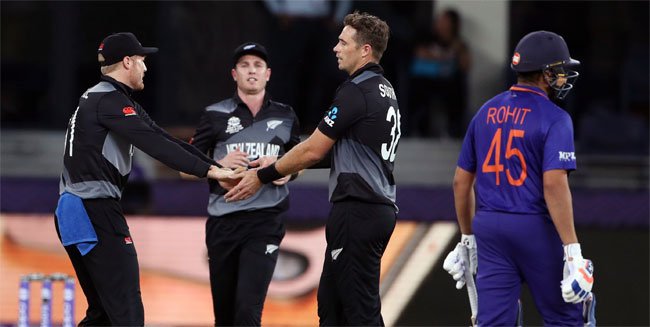 Chasing 165, India reached the target with 2 balls to spare where both Rohit (48) and Suryakumar Yadav (62) performed well. Earlier, Martin Guptill and Mark Chapman’s quickfire half-centuries took New Zealand to 164 for six wickets as well in their allotted 20 overs against India in the first T20 International on Wednesday. The second T20I between New Zealand and India will take place at the JSCA International Stadium Complex in Ranchi on Friday.

“You always want to come out on the right side of the result. We played our best cricket and took it deep. Mark Chapman hasn’t played a lot of cricket of late, and to play the way he played was very pleasing to the side. It was a game of fine margins,” Tim Southee told host broadcaster Star Sports at the post-match presentation.

“It was a good score, we wanted to start well with the ball but we did well to claw back in the middle and obviously Mitch Santner was outstanding with the ball and to take it deep and take it to the last over was a positive sign for us. It’s always tough with different grounds and stuff like that but we set high expectations ourselves, a little bit off in the field and it’s an area we pride ourselves on and that we have been very good at in the last few months. It’s always tough, Daryl has got a lot of training and always want to bowl but probably didn’t leave him enough runs in the end,” Tim Southee concluded.