Ever since he has made his Test debut for India against Australia at Melbourne in December 2018, Mayank Agarwal has left a great impact so far. He has played nine Tests with an average of 67.07, has scored three centuries with a high score of 243.

“Definitely didn’t believe any of this. It’s unreal,” Agarwal told ESPNCricinfo about the year. “Now it just feels like I’m in a dream. It feels terrific to have all of this and I’m very grateful for whatever has happened. There was a debut at MCG, then a World Cup call-up, and some other things.”

“I’m not a man of much comparison. I don’t believe in comparisons, but I would say winning the Test series Down Under. I’ve never felt something like that. When we won the series Down Under, that was a special feeling. Never felt anything like that. Getting picked for the World Cup was also a very different feeling, a very nice feeling. And India being on top of the World Test Championship right now and the kind of cricket we’re playing – it’s also a very great feeling to be part of such a set-up,” he added.

“He (Shastri) said, ‘(It’s) good to have you score these many runs and come (into the Indian team) and obviously having scored that many runs, confidence is definite’. With that said, when they decided that I’m going to play the game, the talk was about what are the things I need to prepare. What are the challenges I could be facing going into my first game,” he again shared.

“I was nervous when I walked into the dressing room. But KL (Rahul) was there. We’ve been the best of friends since a very young age so having him around helped. But the environment there was very calm, very relaxed and they were very welcoming. I never felt uncomfortable. Everyone did chip in to make me feel at home,” he told.

“The ideal end (to the year) would be get a lot of runs for the side and Karnataka winning games going forward, and then again wherever the chance is given to (me to) represent India and Karnataka, score runs and win matches. There is something about winning matches and winning tournaments that motivates me. And probably not just me, motivates everybody else. So, it’s winning more number of matches. More number of trophies, that’s something you crave for,” he said.​ 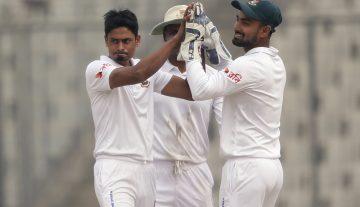