Mumbai batter Sarfaraz Khan thanked his father after scoring a century on Day 2 of the Ranji Trophy final against Madhya Pradesh at the M. Chinnaswamy Stadium in Bangalore. The right-handed batter has scored 134 runs off 243 balls with 13 fours and two sixes, helping Mumbai score 374 in their first innings as well. 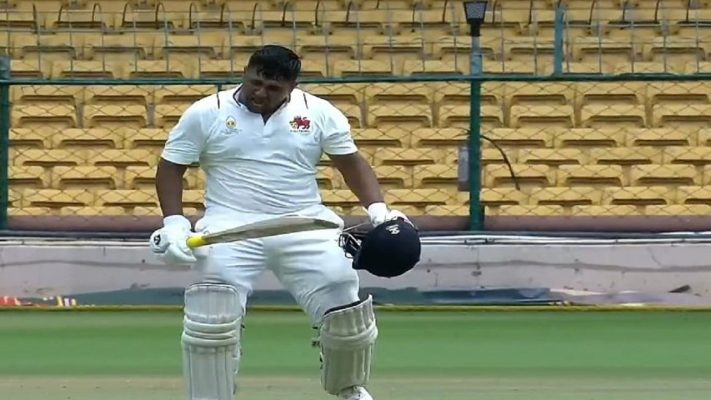 Sarfaraz came to bat with Mumbai at 147/3 in the 51st over and since then, they lost wickets at pretty regular intervals, but Sarfaraz Khan didn’t throw his wicket away. He said that he is glad to have fulfilled his dream of scoring lots of centuries in the Ranji Trophy as well.

“You all know the roller-coaster ride I’ve had. If not for my father, I wouldn’t have been here. When we had nothing, I used to travel with my father in trains. When I started playing cricket, I dreamt of scoring a century for Mumbai in the Ranji Trophy. That was fulfilled. Then I had another dream of scoring a hundred in a Ranji final when my team needed it the most. That is why I got emotional after my century and had tears in my eyes, because my father has worked very hard. All the credit for my success goes to him. Without him, I would be nothing. He has never left my side,” he stated.

“Many times, I feel bad thinking about him, because he has always stood by me. He is very happy. In life, some dreams get fulfilled even if it takes time, but I’m happy I have my dad who has bailed me out of tough situations,” Sarfaraz Khan further added.

However, Sarfaraz Khan has had a stellar season in the 2022 Ranji Trophy as he is not only the leading run-scorer for Mumbai but also the top run-getter in the tournament as well. He has scored 937 runs from six matches which came at an average of 133.85 as well.