The Covid-19 scare in the West Indies team for the Pakistan tour seems to be ever-rising. Five members from the Windies squad have tested positive for Covid-19, and will now isolate themselves. Out of the five, three of them are players. Shai Hope, Justin Greaves, and Akeal Hosein have tested positive. The two others from the coaching staff are Roddy Estwick and the Physician of the side, Akshai Mansingh.

All the cricketers will not be available for taking part in the remaining series against Pakistan. Earlier, Sheldon Cottrell, Roston Chase, and Kyle Mayers had tested positive for Covid-19 as well.

Tweeting about the same West Indies cricket wrote: “A further five members of the West Indies touring party have tested positive for COVID-19.”

A further five members of the West Indies touring party have tested positive for COVID-19 | More below: https://t.co/lOhSH1UdIu

The West Indies have already lost the three-match T20I series to Pakistan as the ‘Men in Maroon’ have lost the first two T20I, and are 0-2 down in the series. While West Indies went lost the 1st T20I by a margin of 63 runs, they were beaten in the second encounter by 9 runs by the ‘Men in Green’.

All the matches in the ODI series will also be played at the National Stadium in Karachi. Pakistan has experienced a stellar run in T20Is played in 2021. They have won 6 out of the 7 T20I series that they have played in 2021, and also reached the semi-final stages of the 2021 T20 World Cup as well. 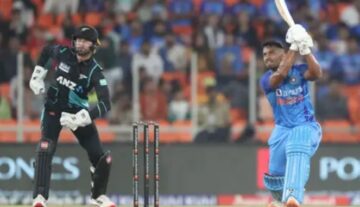