Scoring a double century in Test cricket has always been a special feeling for a batsman and if it comes on a debut, it’s nothing less than a dream coming true. A batsman needs to work pretty hard to achieve such a feat of scoring a double ton on debut. Only a few batsmen have made it possible and the modern-day cricketer does not have any nerves while entering international cricket which is a great hallmark of the development of domestic cricket.

It is time to look at 7 players who have scored a double century on their Test debut.

Reginald Erskine Foster still holds the record for scoring most no. of runs on Test debut which he scored against the Mighty Australian team in 1903 at the SCG. He had amassed  287 batting at number four for the England team and hit 37 fours in the process. His efforts led to an easy win for England by 5 wickets and he was also the only player in Test history to have captained both his national football team and cricket team. He played just 8 Tests scoring 602 runs and he passed away at the early age of 36 due to diabetes.

The former West Indian cricketer, Lawrence Rowe achieved a very rare feat of scoring centuries in both of the innings of his debut Test with the first one being double tin. His 214 run-knock against New Zealand with the of 19 fours and one six and he was one of the most elegant batsmen at the time.

Brendon Kuruppu made his Test debut in 1987 and still holds the record of being the only wicket-keeper batsman to score a double century on debut and he is also the only Sri Lankan batsman to do so. He played a flashy knock of 201 against New Zealand at Colombo and he managed to play just three more Tests after that. He is currently serving as the Maldives national cricket team coach. 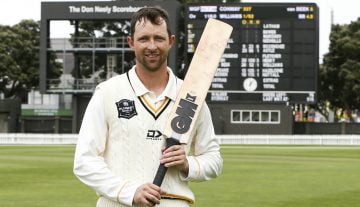