Cricket has been one of the most unpredictable sports. While the game can sometimes give immense joy, it can leave everyone baffled at times as well. The cricketers also get to experience new things every time they walk onto the field. Overall, the game keeps throwing surprises at the batter and the bowler. However, there are certain fixed things as well. Like modes of dismissals.

There are eleven legitimate ways to get dismissed in cricket. Caught, bowled, leg before wicket, run out, and stumped are the most common ways of getting dismissed. The other six modes are retired out, hitting the ball twice, obstructing the field, handling the ball, timed out, and hitting the wicket. Mankading was the latest mode of dismissal that was added to the runout category by MCC.

So, there are eleven ways a batter can be dismissed. While mostly the batters make mistakes to lose their wicket, sometimes it’s not completely their fault as well. There have been many instances in the history of cricket when batters have unknowingly lost their wicket. The most recent of which came from a match in Pakistan’s National T20 Cup.

A batter was seen getting dismissed while he went to retrieve his bat. In a video going viral on social media, a batter loses grip on his bat while he tries to slog the ball. The willow flies a long way and falls behind the wicket, near the wicketkeeper. The batter unknowingly leaves his crease and goes to retrieve it but then the opposition team runs him out.

A Twitter user found the dismissal to be against the spirit of the game. “Batter loses his grip on the bat. Goes to get the bat and is run out. Poor spirit of cricket from Northern? Or is this fine?” he wrote while sharing the video.

ALSO READ: Virat Kohli reveals why his bond with MS Dhoni is special

Meanwhile, a few found it fine saying that it was the batter’s unawareness that cost him his wicket. “Not poor spirit but awareness. The batter was not injured and he should have and it should have been inside the line,” replies a user on the above tweet. 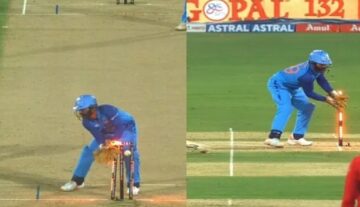