In the much-awaited Qualifier 2 of the Indian Premier League (IPL) 2022 Rajasthan Royals (RR) is locking horns with Royal Challengers Bangalore (RCB) at the Narendra Modi Stadium in Ahmedabad on May 27 (Friday). In the first over of the match, an incident occurred when a fan bypassed security to meet Virat Kohli but was ushered off the field immediately.

After winning the toss, RR skipper, Sanju Samson decided to bowl first citing the unpredictability of a new pitch. As expected, both the teams made no changes to their respective playing XIs. RCB suffered an early blow as they lost the wicket of Virat Kohli early in the second over itself. However, in spite of all these developments in the game, an incident outside the match was noteworthy for the spectators.

Trent Boult started the proceeding for RR and he was preparing to bowl the second ball of the innings. Just when he was starting his run-up, an intruder invaded the field and disturbed the run of play. He entered the field breaking through security but was caught immediately in the act. Security then managed to catch the intruder quickly and took him off the field and the audience gave a noisy reaction to the incident.

Here is how fans reacted to the incident on social media:

rcb is gone y'all I'm calling it 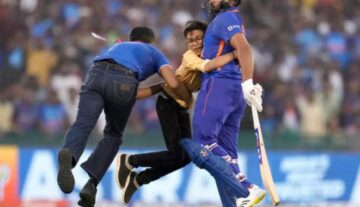 Videos
By CricShots - Jan 21, 2023
A Fan Breaches Security In Raipur To Hug Rohit Sharma At The Pitch