Former India player turned commentator Aakash Chopra has said that the big money Cricket Australia earns from the Border-Gavaskar Trophy made sure that it has changed to a five-match Test affair in the Future Tours Program (FTP). The International Cricket Council (ICC) has also announced the FTP for the 2023-2027 cycle on Wednesday, August 17 and as per the schedule, Team India will tour to Australia for a five-match Test series in 2024-25 as well.

In a video shared on his YouTube channel, Chopra said: “The FTP has been announced and there are a lot of matches in that. The Border Gavaskar Trophy is now going to be like the next Ashes, where there will be five Test matches. The truth is that you make money when India goes and that money is extremely important for Australian cricket. We all were feeling that it will become difficult, so many leagues are there – the IPL, BBL and The Hundred have almost created their own windows – so how will bilateral ODIs and T20Is happen? It is there, it is more than the ongoing cycle.”

However, many cricket experts believe that the growth of T20 leagues will be the cause of the end of ODI cricket and bilateral T20Is as well. But, the ICC have scheduled 281 ODIs and 323 T20Is to be played in the next four-year cycle as well. While observing that Team India will be playing a decent number of matches, Aakash Chopra shared his concern for South Africa. He also stated that the Indian Premier League (IPL) and the Pakistan Super League (PSL) might overlap and with this, the latter might get affected too.

“India is going to play 141 matches in all – 38 Tests, 42 ODIs and 61 T20Is. I see Bangladesh playing the most number of matches, where they are playing 34 Test matches, a total of 150 matches. South Africa, full Test nation, is playing the least matches – 113. I am slightly worried about South Africa. In the new FTP, we have also come to know that the IPL and the PSL might actually happen at the same time in 2025. So it is going to be slightly difficult for the PSL, that’s what I feel,” Aakash Chopra concluded. 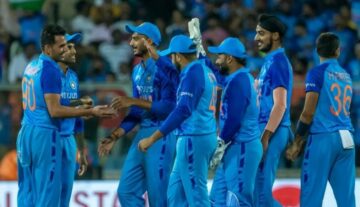